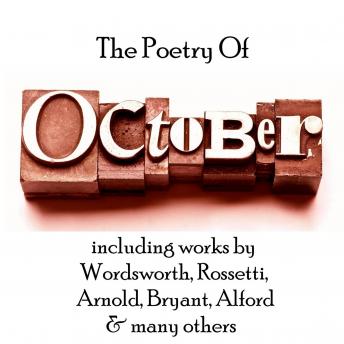 The Poetry of October

October - The tenth month of the year in the Gregorian calendar and the land prepares to give up more it its colourful coverings.

On this and other themes our poets including Wordsworth, Rossetti, Arnold, Bryant and Alford have much to say. Among our readers are Richard Mitchley and Ghizela Rowe. The tracks are; October - An Introduction; Song Of The Democratic Review Of It's Birthday, October 1st 1857 By William Ross Wallace; An Ode, Written October 1819 Before The Spaniards Had Recovered Their Liberty By Shelley; Anticipation, October 1803 By William Wordsworth; Embarcation (Southampton Docks, October 1899) By Thomas Hardy; Give Me October's Meditative Haze By Alfred Austin; Hymn For The Celebration At The Laying Of The Cornerstone Of Harvard Memorial Hall, Cambridge, October 6th 1870 By Oliver Wendell Holmes; An October Garden By Christina Georgina Rossetti; North Wind In October By Robert Seymour Bridges; October By George Arnold; On The Tenth Of October By Phillip Henry Savage; October By John Jay Chapman; Through October Fields by James Edwin Campbell; October On The Sheep Range By Arthur Chapman; The National Prayer, October 1840 By Henry Alford; October By John Payne; October By Paul Laurence Dunbar; On The Road To Waterloo, 17th October (En Vigilante, 2 Hours) By Dante Gabriel Rossetti; October By William Cullen Bryant; An October Sunset By Archibald Lampman; October 1915 By Dora Sigerson Shorter; October 21st 1905 By George Meredith; October Musings 1866 By Janet Hamilton; Lines Written October 23rd 1836, A Few Hours After The Birth Of My First Child By Henry Alford; Written At Lovere, October 1736 By Mary Wortley Montagu; On St Crispins Day, October 25th, 1763 By James Wilson Claudero; Octobers Bright Blue Weather By Helen Hunt Jackson; Last Week In October By Thomas Hardy; An October Evening By William Wilfred Campbell; from October - On Nearing Halloween By James Graham.