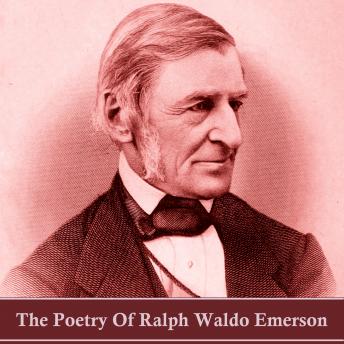 The Poetry of Ralph Waldo Emerson

Ralph Waldo Emerson was born in Boston, Massachusetts on May 25th, 1803, the son of Ruth Haskins and the Rev. William Emerson, a Unitarian minister. Emerson was the second of five sons who survived into adulthood.His father died before Emerson was eight and the young boy was raised by his mother and other female members of the family.Emerson's formal schooling began at the Boston Latin School in 1812 when he was 9. In October 1817, at 14, Emerson went to Harvard College. He did not excel as a student but was elected Class Poet in his senior year which required him, as was the custom, to present an original poem on Harvard's Class Day, a month before his graduation on August 29th, 1821. In 1826, faced with poor health, Emerson went to seek out warmer climates and eventually to St. Augustine, Florida, where he took long walks on the beach, and began writing poetry. Initially Emerson made his living as a schoolmaster, then went to Harvard Divinity School which had opened in 1816. Emerson met his first wife, Ellen Louisa Tucker in 1827, and they married when she was 18. They moved to Boston, but Ellen was already sick with tuberculosis. Emerson was now offered the post of junior pastor by Boston’s Second Church and he was ordained in January 1829.Ellen died at the age of 20 in February 1831, after uttering her last words: "I have not forgot the peace and joy." Emerson was devastated and visited her grave in Roxbury daily. He also began to question his faith and began to disagree with the church's methods, and this eventually led to his resignation in 1832. On November 5th, 1833, he made the first of an eventual total of some 1,500 lectures, ‘The Uses of Natural History’, in Boston.He married Lidian Jackson on September 14th, 1835 and the couple moved to Concord. They would have four children.Over the following decades a remarkable career would emerge. He would become renowned as an essayist, lecturer, philosopher, and poet who led the transcendentalist movement of the mid-19th century. In January 1842 Emerson's first son, Waldo, died of scarlet fever. Emerson wrote of his grief in his classic poem ‘Threnody’ ("For this losing is true dying") published in his 1847 collection ‘Poems’. His poetic work is often overshadowed by the other facets of his career but there is no doubt that its contribution was immense. He remains one of the linchpins of the American romantic movement. Indeed, his works, from essays to poems, have greatly influenced the thinkers, writers and poets that have followed him. Ralph Waldo Emerson died of complications from pneumonia on April 27th, 1882 at the age of 78 in Concord, Massachusetts.