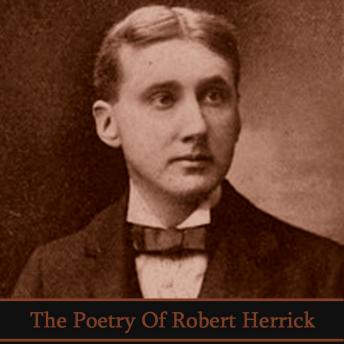 The Poetry of Robert Herrick

The Clergyman and poet, Robert Herrick was born in Cheapside, in London in 1591. An exact date is not known though he was baptized on August 24th, the seventh child of Nicholas Herrick, a wealthy goldsmith. Some controversy surrounds several chapters in his early years. The first are allusions that his father, in November 1592, two days after making a will, killed himself by jumping from the fourth-floor window of his house. However, the Queen's Almoner did not confiscate the Herrick estate for the crown as was the usual procedure with suicides, so an alternate narrative emerged that he fell accidentally which seems to have more credence.There is no record of Herrick attending school. Some claim a poem alludes to Westminster School, others merely that he meant Westminster, the area. Another school of thought claims he was educated at Merchant TaylorÕs School. What is known is that in 1607 he was apprenticed to his uncle Sir William Herrick as a goldsmith. Herrick certainly seems to have been a keen and avid poet. The earliest work known to be written by him dates from 1610; 'A Country Life', and deals with the move from London to farm life in Leicestershire. After six years as an apprentice, when Herrick was 22 he matriculated at St JohnÕs College, Cambridge before moving to Trinity College and graduating with his Bachelor of Arts in 1617, Master of Arts in 1620, and in 1623 he was ordained priest. By 1625 he was well known as a poet, mixing in literary circles in London such as that around Ben Jonson. An avowed admirer of Jonson he was also one of a group whom became known as ÔThe Sons of BenÕ writing both in his style and about him.In 1629 he was presented by Charles I to the parishioners of Dean Prior, a remote parish of Devonshire. The best of his work was written in the peace and seclusion of country life; 'To Blossoms' and 'To Daffodils' are classical depictions of a devoted appreciation of nature. However, after he refused to subscribe to The Solemn League and Covenant, he was ejected from Devonshire in 1647 and moved to London where he published his religious poems Noble Numbers (1647), and Hesperides (1648).Herrick was distinguished as a lyric poet, and some of his love songs, for example, 'To Anthea' and 'Gather Ye Rose-buds' are considered exceptional. By 1660 he was reinstated at Dean Prior where he lived for the remainder of his life. He wrote no more poems after 1648 but over his life it is thought he wrote in the region of 2,500 poems in total, only a small portion of which were ever published.He died in October 1674, at the age of 83 in circumstances unknown. He was buried on October 15th, 1674 in an unmarked grave in the churchyard at Dean Prior. This volume comes to you from Portable Poetry, a specialized imprint from Deadtree Publishing. Our range is large and growing and covers single poets, themes, and many compilations.