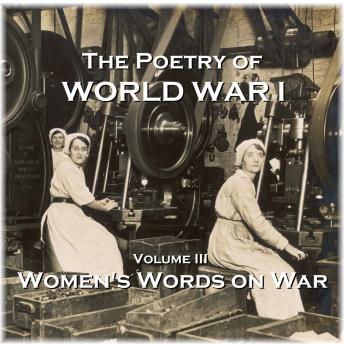 War may be rationalized as Ôdiplomacy by other meansÕ but the reality is that when tribes, Nations and peoples bring themselves into armed conflict with one another mayhem, terror and slaughter are the result.In the First World War, The Great War, The War to End all Wars any idealistic aims that it was a Ôjust causeÕ and would be all over in a few months were shattered against the vast scale of millions dead or wounded all for the often temporary gains of a few miles of shell-pocked mud. Human bodies were of little more value than the bullets and shells which mowed them down.In this series of poetry volumes we look at the first world war from several viewpoints. From poets who died, often in battle, during its torturous years, to the women who write of war and its consequences as well as an anthology of those poets, some still of fame, and some now forgotten with only their words to bear witness for what they have experienced. Each has an individual point of view that bears its own truth.Whilst in modern times women fight and serve in many armed forces a century ago their work was needed to tend and comfort the sick and wounded from battle and help Nations, depleted of their menfolk, work as best they could.Within this vast landscape of pain and valour these women also put pen to paper to produce words that show us war from another angle. Their own. Whether it be jingoistic or patriotic, reflective or overwhelming their verses have an eloquence that is both painful and tender.This volume comes to you from Portable Poetry, a specialized imprint from Deadtree Publishing. Our range is large and growing and covers single poets, themes, and many compilations.