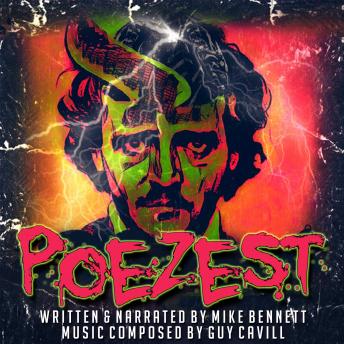 Poezest contains works of legendary author Edgar Allan Poe reworked and reimagined by Mike Bennett, who has intertwined elements of Edgar Allan Poe's character with well-known works such as The Black Cat; The Raven; Telltale Heart; Buried Alive and many more.

Written in verse and prose, this body of work captures the spirit of Poe whilst retaining an originality that is as comedic as it is macabre, replete with murder, mystery and machiavellian intrigue.

The music underscore has been provided by Guy Cavill, capturing the mood of the creepy tale that helps to take the listener on a journey, that has more twists and turns than Brands Hatch.

About the Composer: Guy Cavil composes classical music, themes and musicals and has had three biographies published.