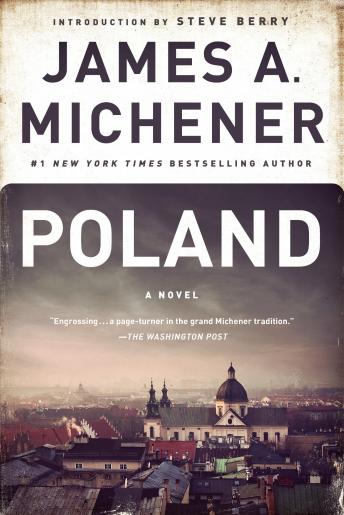 In this sweeping novel, James A. Michener chronicles eight tumultuous centuries as three Polish families live out their destinies. The Counts Lubonski, the petty nobles Bukowksi, and the peasants Buk are at some times fiercely united, at others tragically divided. With an inspiring tradition of resistance to brutal invaders, from the barbarians to the Nazis, and a heritage of pride that burns through eras of romantic passion and courageous solidarity, their common story reaches a breathtaking culmination in the historic showdown between the ruthless Communists and rebellious farmers of the modern age. Like the heroic land that is its subject, Poland teems with vivid events, unforgettable characters, and the unfolding drama of an entire nation.

“Engrossing . . . a page-turner in the grand Michener tradition.”—The Washington Post

“A Michener epic is far more than a bedtime reader, it’s an experience. Poland is a monumental effort, a magnificent guide to a better understanding of the country’s tribulations.”—Chicago Tribune

“Stunning . . . an unmatched overview of Polish history . . . The families themselves come very much alive, and through them, Poland itself.”—USA Today