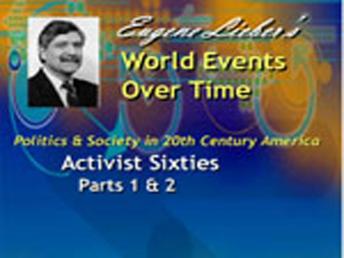 Echoes of the Fifties. America is the dominant economic power. Red Scare continues. Fears are real real but based on demagoguery. Growth of suburbs, the dream of the middle class. Relative prosperity prompted by Cold War spending. G I. Bill, homes, jobs, baby boom. (4.25.00) = Suburbia & decline of cities. Racial divide as whites leave the cities, leading to riots and upheavals. The Sacco-Venzetti case reflects issues of immigrants and anti-radicalism.. (7.24.00) = Blandness of the 50s. Conformity in appearance, dress, entertainment, avoidance of social issues, as effect of Red Scare.. Birth of rock & roll as undercurrent of rebellion. Prevalence of autos after expansion of highways (14.41.00) = The Eisenhower presidency. A national hero. After election, resolves Korean stalemate. Continues Cold War atmosphere but extreme elements reduced. Moves to restrain military budget, warns in farewell speech the the military-industrial complex is a threat to American democracy. Technology advances. Conquest of polio, TV, relatively prosperous Cold War economy (21.47.00) = Movements of the Sixties. Shock of change. Nixon, epitome of the Cold War warrior loses election to John Kennedy in 1960. The role of TV and the visual image in the political world. Distinguishing image from accomplishment, looking back as far as Teddy Roosevelt. . (33.52.00) = JFK's charisma. Inspires youth to join the Peace Corp and to enter public service. (40.25) = Accomplishments. The missile gap lie. The escalation of the Vietnam War. Domestically, he signs bill to end discrimination in federally subsidized housing in the future, not existing housing. (42.09.0) = Early civil rights movement. Impact of WWII on jobs. Jobs previously not open to millions of blacks who had moved north, are now open to them because of war production boom. After the war they want to keep these jobs gained. (46.51.00) = School desegregation. 1954 Supreme Court decision Brown vs Topeka Board of Education overturns 1896 Plessy vs Ferguson decision of separate but equal education for blacks and whites. Efforts to desegregate against resistance in South. President Eisenhower enforces the court order. (52.49.00) = Sports. Basketball. Basketball. The need for black athletes for athletic success. (54.20.00) = Emmett Till case, 1950. This 14 year old visits relative in Mississippi, is kidnapped and killed after being accused of whistling at a white woman. The nation is shocked, becomes impetus to civil rights movement. (55.04.00) = Full blown civil rights movement in the 1960s. NAACP led by Roy Wilkins, emphasizing court action. Martin Luther King, Jr. The role of the black preacher as overall leader back to time of slavery. Promotes non-violent resistance. Rosa Parks.sparks bus boycott in Montgomery, Alabama, resulting in integration of bus service. . (59.57.00) = Freedom Summer. Voting registration. Blacks disenfranchised by obstacles to voting registration since the early 20th century. Goodman, Shwerner and Chaney, 2 whites and 1 black, Northern volunteers to promote black voter registration in the South, are found murdered, shocking the nation into further civil rights action. (1.02.57.00) = Political responses. JFK's approach to the civil rights movement contrasts sharply with that of his brother, Robert. Lyndon Johnson becomes president after JFK's assassination, makes major push for civil rights legislation. The role of the church. The great variety of approaches, their accomplishments and failures, but also often their dark sides. How Johnson's' Great Society is set back by Vietnam War. (1.06.09.00) = Public responses Many unarmed, forgotten people, black and white, North and South, at great risk and with great courage, are part of this modern civil rights movement. The role of churches. Mixed results in North and South. Martin Luther King's charisma and moral authority. (1.11.10.00) = Nation of Islam. Founded by Elijah Mohammad. Conversion of blacks to Islam. American slavery condoned by while Christian ministers at the time. Black Nationalism, separation of races preached.

Movements of The Sixties (continued). Malcolm X. Evolves from petty gangster, converts to Islam in prison through Nation of Islam. He is aggressive, fiery in contrast to non-violent forms of resistance. Wins much support. Issue of name changes relates to origins of names during slavery times. Breaks with Nation of Islam, becomes a threat to it. Later, modifies his perspective to wider social changes. He is assassinated.. Black Panther Party. Involved in community services. Believes in meeting violence with violence. Women are subordinate, other dark sides to it. Sense of fatalism that their days are numbered. (6.12.00) = Status of Civil Rights Its earlier roots. The groundbreaking Supreme Court decisions. Martin Luther King's non-violent approach. The impact of murders and other violence in the South, but not confined to the South. Turning point moments. JFK's approach to the civil rights movement contrasts sharply with that of his brother, Robert. Lyndon Johnson becomes president after JFK's assassination, makes major push for civil rights legislation. The role of the church. The great variety of approaches, their accomplishments and failures, but also often their dark sides. How Johnson's Great Society is set back by the Vietnam War. (15.07.00) = The Youth Movement. The variety of underlying causes: JFK's charisma, civil rights movement, Vietnam War horrors and their protests. The 60s movement of self-expression, with much naivete. Rock & Roll as its voice. The downside of the movement including health and social consequences of drug use, promiscuity, and unrealistic sense of imminent utopia. Seen as a negative period by Conservatives. (20.33.00) = Modern Women's Rights Movement. Early 20th century roots. Turning points: new job opportunities of World War II, the 1950s book, "Feminine Mystique," by Betty Freidan, consciousness-raising groups. Resulting anger and resistance. Access to political power, enrollment in career programs. The 1970s Supreme Court decision Roe v Wade on abortion rights. The issue of choice reflects the movement's core -- choices are available. Women's movement is a threat to men and many women. Rejection of Equal Rights Amendment. (35.13.00) = Native Americans. People are kept down by denying them their history, culture, heritage. Choices of staying on the Reservation or assimilating into society both have their value and their dark side Other Movements. The Immigration Movement. Recognition of Gays, their emergence and the resulting resistance. (40.24.00) = Vietnam as Turning Point. Expansion of the war. Assassination of charismatic leaders. Shock of 1968 Tet offensive. American public's mistrust of its leaders (45.35.00) = Nixon Presidency. Underlying issues in his election. Nixon is complex, has paranoid side but also accepts the positive uses of government for public welfare. Creates EPA, proposes minimum guaranteed income. Proposes national health care system, opposed by Democrats. Nixon's legacy is mixed. (53.26.00) = Gerald Ford Presidency. Vice President Ford becomes President but hurts his own presidency by pardoning Nixon unconditionally after Nixon resigns during impeachment hearings following the Watergate scandal. (54.51.00) = Jimmy Carter defeats Ford in 1976 election. Hurt by the Iranian hostage crisis. Brings human rights into areas of foreign policy. Not considered a successful president. He is more recognized for Habitat For Humanity and other civic efforts after presidency. (57.3100) = Major economic changes. U. S., single dominant economic power after World War II. Starts in the 1950s, through the 1960s and into the future. Total U.S. dominance diminishes. In the 60s Germany, Japan, and Russia rebuild with newer industrial technologies. The high U.S. military budget is important for prosperity but is capital intensive, while Japan, protected by the U.S., spends heavily on labor intensive civilian projects which impact favorably on employment and has social value. Japan freed to direct research and development to social needs. Total U.S. dominance diminishes. 1.05.003.00) = Major challenges to U.S. economy. These factors lead to multinational corporations, internationalization of production. This leads to rust belt areas and shifts to U.S. regions with lower labor costs, continuing into the 70s. The union movement diminishes. Economy hurt by importation of cheap foreign goods, unfavorable balance of trade, significant unemployment, stagflation. High gas prices in the 70s hurts auto industry. (1.13.058.00) = Significant change in South and country. The "New Right" emerges. The political scandals of LBJ and Nixon. The GOP shift to the right. The erosion of liberalism of Democrats in power a long time. Traditional values versus civil rights, women's rights, etc. The GOP Southern Strategy addresses the resentment of Southern whites to civil rights changes leads to the rebirth of the GOP majority. Republican favoritism toward business.