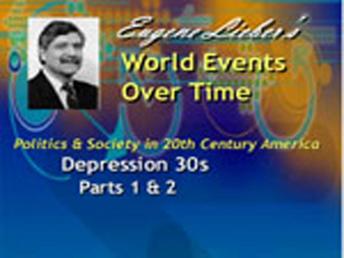 Hoover as President. Failing the Depression. Hoover believes in volunteerism-- the role of state, local governments and charities. But the Depression needs the enormous resources of the federal government. The cycle of business contraction, layoffs, and consumers unable to consume. The Hooverville slums. The devastating impact on middle class families. Grinding rural poverty. The psychological impact of people irrationally blaming themselves. (13.29.00) = Hoover's recovery theory. He believes that the best way to help is the "trickle-down" theory. Help those at the top. This is a failure because business lacks confidence and the money is not invested in job-making production. Hoover lacks charisma but makes things worse by his personal insensitivity to the calamity. (17.22.00) = The Bonus Army. Bonuses are promised to war veterans but funds not appropriated. Veterans' protest is smashed by the military. (21.40.00) = Roosevelt as President. FDR's background. He is from landed wealth, believes in service to the people as career. He is charismatic. Returns to politics after suffering polio paralysis. A dangerous drift between election and taking office 4 months later. Bank "holidays." His inspiring inaugural speech, "We have nothing to fear but fear itself.". (26.45.00) = FDR's political philosophy: either pragmatic or opportunistic, depending on whether you approve or disapprove of him. His fireside chats. Passes emergency banking bill. He continues the "trickle-down" approach, but he engenders trust. (31.50.00) = The first 100 days. A spate of legislation-- fixing prices, fixing standards. The NRA (National Recovery Act) fails. Dust storms due to drought causes havoc to farmers. The Agricultural Aid Agency is enacted to aid farmers. It raises prices by producing scarcities, but fails in practice, hurting sharecroppers the most, and is declared to be unconstitutional as well. (44.13.00) = FDR extends the federal role. He creates relief agencies, following John Keynes' theory of under-consumption of the jobless. Therefore, jobs must be created, a "bottom-up approach, the opposite from the "trickle-down" approach. Direct relief is provided by the federal government. The PWA for large public projects for skilled workers, and the WPA for smaller level projects employing unskilled labor. It also aims to help creative people: artists, actors, musicians, photographers.

Roosevelt as President (continued) Role of Eleanor Roosevelt. She develops an independent life, becomes adviser to her husband, pushing humane issues, including the racism in the South and the rest of the nation. The Marion Anderson concert. (3.12.00) = The Tennessee Valley Authority. A unique project to help a poverty stricken rural area. It revitalizes the region and is an enormous success of a public government agency. Accordingly, the private sector blocks any attempt to repeat this elsewhere in the future. (6.34.00) = FDR and business. FDR is opposed by business interests which believe he wants to destroy capitalism. Instead, he wants to save it during this economic crisis. Business refuses to address human needs, attempts to deter radical parties. Seeing FDR as the enemy prolongs the Depression. (10.40.00) = Labor's Emancipation Proclamation. In 1935, the Social Security Act and the National Labor Relations Board (NLRB), known as the Wagner Act, are passed. The CIO union is created for industrial workers, contrary to the economic logic of the time. The auto workers' sit-down strike. The steel workers' strike. The police shooting of pickets and family members in 1937. (14.13.00) = The Communist Party. It increases membership but does not become a mass party. Why the Russian Revolution has no chance of being duplicated here during this time. he highly regimented and disciplined party leaders become labor organizers, a very hazardous endeavor. They have humane commitment, but get misguided advice from Russia. The changing party line eventually erodes its membership ranks. On a positive side, they oppose racial segregation, and are the lone voices of the dangers of fascism. (26.13.00) = FDR's second term.The Wealth Tax Act is delayed by FDR to win over business, but he is unable to, and it passes in 1935. He wins his second term in 1936 by a landslide. FDR proposes to pack the court which blocks his policies, but Congress defeats this. When passed, it is declared unconstitutional. The Fair Labor Standards Act is passed in 1938, setting hours and wages to reach the 8-hour day, 40-hour week. It covers child labor but excludes other groups (34.32.00) = FDR's effect on the Depression. His efforts ameliorate but do not end it. Only World War Two ends it. It gives the business community the security to invest, produce, and hire because it generates a guaranteed market with unmatchable profits. Since the 1930s until the present, a war economy prevents a depression. (37.45.00) = Lessons learned. A better answer to welfare or "the dole" is jobs with a future through government action, which some see as "socialism." Welfare only continues poverty cycles. This is the issue of welfare versus a permanent war economy. There is the issue of a trend to a more powerful government and chief executive, also its inherent danger.