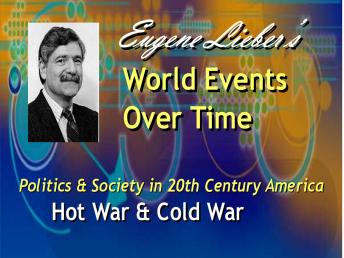 World War II Domestic Policies. Although Depression is eased by New Deal efforts, it is not fully ended before the war. Great success of industrial output ends the Depression. Enormous wartime profits. Close relations between the government and the business community. (4.31.002) = Emergence of women in the labor force. Manpower needed, women prove their ability, sweeping aside negative stereotypes of employers. Social impact of the war. Lack of housing. Disruptions of social relationships. (6.43.00) = Death of FDR. Breaking tradition dating to George Washington, FDR runs and wins a fourth term to see the war through, although his health is failing. Great outpouring of public grief upon his death on April 12, 1945, just as the war's end is in sight. (10.54.00) = Truman's Role in the Cold War. Need to maintain war economy to keep U.S. out of Depression. (17.55.00) = Beginnings of anti-communist hysteria. The role of the Cold War and anti-communist hysteria stokes the fear of war. This originates during the Democratic administration of President Truman. (26.12.00) = The Loyalty Oath. Imposed on government employees, this heightened public hysteria without providing any real national protective value. (31.44.00) = Controversial spy cases. The Alger Hiss case examined. Each case adds to public's anti-communist hysteria. (37.12.00) = The power of J. Edgar Hoover and the FBI. The view that the whole nation is on trial." (44.04.00) = Other events adding to public hysteria. Russia gets the Bomb, suggesting the work of betrayal of our secrets by spies, although in the past scientist here believe that a Russian bomb is inevitable. China is taken over by the communist in 1949 raising cries of betrayal, ignoring the preceding pattern of events over a number of years. (47.41.00) = Cold War Politician. Richard Nixon Nixon rides the anti-communist hysteria for political gain, becomes vice president under Eisenhower, and later, president. The controversy of the Rosenberg spy case. (53.00.00) = HUAC and Sen. Joseph McCarthy. Impact on the nation's intellectual life. Irresistible pressure to inform on others. McCarthyism becomes a term for the unproven smear. President Eisenhower fails to come to defend George Marshall, accused of being a traitor. Downfall of McCarthy. Fear of loss of jobs or imprisonment drastically stifles all forms of creative expression, and the public access to full information. (1.10.12.00) = Truman's Liberal Side. Taft-Harley Act. Truman vetoes this anti-union legislation, but it is overridden. (1.12.55.00) = Truman desegregates the armed forces. One wartime episode where black American solders were forced off a train in the U.S. to accommodate German prisoners. (1.17.51.00) = The G. I. Bill of Rights. Initiated in the FDR administration, continued by Truman. This significantly advances the lives of veterans. This is questioned as a form of "affirmative action." (1.19.45.00) = Korean War stalemate. This diminishes Truman's esteem. Support is offered for the view that Truman was a mediocre president. (1.24.36.00) = Truman's 1948 upset election victory. . What if Dewey had won? Speculation about impact on future political scene.