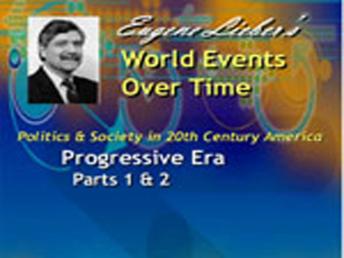 Early U.S. Industrialization. . In the latter Part of 19th Century: the railroad builders, the domination of the industrial giants. Amoral free open competition, always striving for monopoly. Not inventors but they understand the market and its future direction. Time of great corruption but also heroes. (5.40.00) = The Labor Force. Immigration from eastern Europe, generally despised but needed. Development of the labor movement due to poor working conditions. The legacy of the Farmer's Movement and the Populist Party (11.34.00) = The Progressive Era (1901 to 1917). The assassination of McKinley in 1901 and Theodore Roosevelt becomes president is the beginning of the era. The U.S. entry into the First World War in 1917 marks the end. (17.28.00) = A strong federal government is seen as remedy against corrupt city political machines and against the evils of laissez faire capitalism. (22.12.00) = Roosevelt reputation as "Trust Buster" is in question. The difference between the rhetoric and the reality. (28.06.00) = His Anthracite Coal Strike intervention credits him as champion of labor. In a larger sense, the issue favored the big business community. Really seen as paternalism. (34.00.00) = Pure Food and Drug Act regulating food production is response to Upton Sinclair's, "The Jungle." The legislation is watered down, actually squeezes out the smaller competing companies. (43.38.00) = The Age of Conservatism. The era is really a partnership between business and government, although big business is wary of President Rooseve. Roosevelt Promotes Conservation , especially in the west. Yet giants can benefit because of lack of enforcement and decreased competition from squeezing out of smaller companies. (46.11.00) = President William H. Taft (1903-1913). Lacks charisma compared to Theodore Roosevelt, but is underappreciated. (49.35.00) = Woodrow Wilson becomes president in 1912 because of split in Republican ticket. Roosevelt, running as an independent, comes in 2nd,and Taft, the incumbent, comes in 3rd. Eugene Debbs gets 1,000,000 votes. The mood of the electorate is reformist . (57.54.00) = Wilson's legislation. Lowers protective tariff, enacts Federal Reserve Act for national banking standards, the Clayton Act to toughen the Sherman Anti-Trust Act. But these are enforced by the Federal Trade Commission whose members are appointed by the president.

The Progressive Era (1901 to 1917). (continued). Issue of Race is Ignored. In the late 1890s, the one party South becomes dominated by upper class with no further need to woo black voters. The Jim Crow era of overt and full segregation. Lynching. Fallacy of "separate but equal" education. Federal government fails to intercede. The racist attitudes of Theodore Roosevelt and Woodrow Wilson. (11.21.00) = Reform Atmosphere of the Country. Role of the Federal Government is mixed at best. State and municipal governments show more reform efforts. Role of investigative reporters, "muckrakers." Labor movement weak. Exploited immigrant labor. (23.13.00) = Women's Rights. The Triangle Shirtwaist Factory fire in 1911. The 15th Amendment refuses voting rights to all women, black or white. Suffrage rights oppose the war but not openly so as to keep President Wilson's support for the voting rights amendment which passes in 1920. (27.43.00) = The Jim Crow Era. The sharply contrasting views for African-Americans advocated by Booker T. Washington, who comes from a rural South background, and W. E. B. Du Bois, who is urban and highly educated. How these views each has its own relevancy. The role and impact of the fighter, Jack Johnson. (40.16.00) = The End of the Progressive Era. U.S. Enters the War, 1917. Wilson is reelected in 1916 on the basis, "He kept us out of war." Events inflame public opinion. Wilson's view that the war requires intolerance at home to win. Opponents of the war are repressed. Criticizing the government becomes a crime. The anti-capitalist nature of the Bolshevik Revolution in 1917 causes the government to repress all radical elements. (52.26.00) = After the War.There is public disillusionment with the war and its leaders. Wilson's self-righteousness is credited with the U.S. Senate's not ratifying the League of Nations and the Treaty of Versailles. The abrupt end to the Progressive Era.