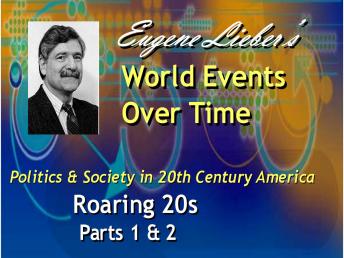 Changes in The Twenties, Continuity, not sharp contrast. The popular image of bathtub gin and excitement is not the full picture. The immigrants who come by the millions since the late 1800s as cheap labor for the factories are from south and eastern Europe. They are very different from typical Americans, and despised. In 1924 and 1925 the U.S. decides it has enough labor, enacts a quota system that favors north and west Europe and restricts south and east Europe. (5.20.00) = Anti-radical feelings. Immigrants are identified with radicals. After the 1917 Bolshevik Revolution, there is a fear of the spread of their ideals, fear of anarchists. The great cause of Sacco & Vanzetti, which turned some people to more radicalism. (15.46.00) = Wilsonian Moralism. President Wilson has a self-righteous sense of absolute certainty which greatly influences events. The Prohibition Amendment (23.48.00) = The Scopes Trial which pits modernism against creationism. Short term victory for modernism, short term defeat for fundamentalism (31.52.00) = Race. Mostly ignored, yet another continuation of the Progressive Era. Revival of the KKK in the 1920s, which becomes a force in the Democratic Party, with national influence. (36.18.00) = Both political parties are equally conservative.. In economics, a partnership between business and political parties, contrary to rhetoric. Tendency toward monopolies increases, as small businesses pushed out. (39.39.00) = Evolution of economic policy. Prominence of advertising. Credit buying. Electrification of homes. Rise of the chemical industry for new products. New industries. Charles Lindbergh's solo Atlantic flight in 1927. Finance capitalists are dependent on banks, but Henry Ford is self financing. Ford's dark side: acts brutally against unions, is a vicious anti-Semite.

Changes in The Twenties (continued). Impact of the auto. Transforms the U.S. Spawns other industries. Roads are surfaced. Changes everyday lives: access to work, vacation choices, dating habits. Finance capitalists are dependent on banks, but Henry Ford is self-financing. Ford's dark side: acts brutally against unions, is a vicious anti-Semite. (12.32.00) = Entertainment. Movies and the coming of sound in the 1927 "Jazz Singer," as a great escape. The radio opens national and international connections. (15.09.00) = Sports. Baseball as the national sport. The "dead ball" era in the first 2 decades. Ty Cobb as sports hero but also as psychopath. The notorious "reserve clause" contracts. The Black Sox Scandal of 1919. Revival of baseball by Babe Ruth into a slugger's game where the ball is harder. Babe Ruth's hidden dark side. (16.28.00) = Combination of Heroes. There is Henry Ford, Charles Lindbergh, Babe Ruth, but also, Benito Mussolini who thwarts radicals and who represents order. (17.47.00 = Political Leadership. President Warren G. Harding.is weak and a failure, but has capable aides. The Teapot Dome Scandal seems tame in the scope of today's scandals. A nicer guy than President Wilson, he pardons Eugene Debbs from prison where he was sent for opposing the war. He becomes ill and dies in 1923. (28.06.00) = Calvin Coolidge. with limited ability, becomes president after Harding dies. He runs in 1924 in his own right and is elected. He vetoes a farm relief bill twice seemingly uncaring that farmers are in great need. (30.01.000) = Herbert Hoover is elected in 1928. The Stock Market crash in October 1929. It is a decade of enormous monopolistic profits, fueling abundant speculative ventures. The crash does not cause the Depression. At the time 2/3 of the people are living below subsistence level, lacking consumer value (aside from their own plight), and in turn, the market is lacking.