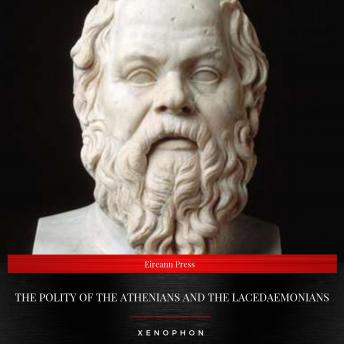 The Polity of the Athenians and the Lacedaemonians

Xenophon (431-355 BC), son of Gryllus, of the deme Erchia of Athens, was a soldier, mercenary and an admirer of Socrates. He is known for his writings on the history of his own times, the sayings of Socrates, and the life of Greece. He participated in the expedition led by Cyrus the Younger against his older brother, the emperor Artaxerxes II of Persia, in 401 BC. His record of the entire expedition against the Persians and the journey home was titled Anabasis (The Expedition or The March Up Country). He was later exiled from Athens, most likely because he fought under the Spartan king Agesilaus against Athens at Coronea. The Spartans gave him property at Scillus, near Olympia in Elis, where he composed the Anabasis. His writings are often read by beginning students of the Greek language. His Hellenica is a major primary source for events in Greece from 411 to 362 BC, and his Socratic writings, preserved complete, are the only surviving representatives of the genre of Sokratikoi logoi other than the dialogues of Plato

Polity of the Athenians and the Lacedaemonians

This title is due for release on October 13, 2018
We'll send you an email as soon as it is available!