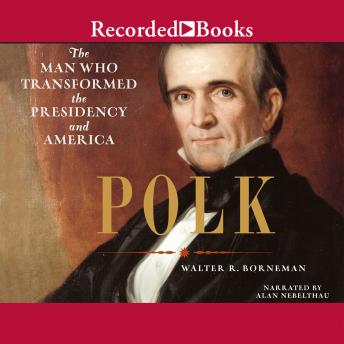 Polk: The Man Who Transformed the Presidency and America

Tennessee Democrat James K. Polk is generally ranked among the nation's most effective chief executives. In this straightforward, unnuanced biography, Borneman (1812: The War That Forged a Nation) relates why. Coming into office determined to annex Texas, gain the Oregon Territory from Britain, lower the tariff and reform the national banking system, Polk achieved all four aims in his single term in office (1845-1849). But Borneman overlooks that in more or less completing the nation's lower continental territory, Polk bequeathed a fateful legacy to the nation-not so much transforming the U.S. (as the subtitle overstates) as setting it on the road to civil war. With the annexation of Texas came war with Mexico, which stripped that nation of half its lands while gaining the U.S. the southwest and California. It also unloosed the mad genie of slavery's possible further spread westward. Polk left the nation larger but politically crippled and morally weakened. But Borneman sticks to the narrative and doesn't place his subject in a larger historical context. 'Tis a pity, for Polk's administration ought to be a lesson to all candidates and all presidents at all times

I generally prefer to listen to fiction as opposed to non-fiction as I find the visual reinforcement of reading text as important step in retaining and recalling factual information. That said, the narrative structure of this biography in the very capablle hands of its reader (Nebethau) has made this listening experience very enjoyable and helpful. The prose style is very accessible as it is clear and cogent. The scholarship and research if first-rate and the author’s 21st century sensibilities are not ignored in his dealings with the 19th century issues of slavery and Indian removals, but rather subtly relate those basic human rights issues to their 21st century correlates in a most effective way.

This title is due for release on May 9, 2008
We'll send you an email as soon as it is available!