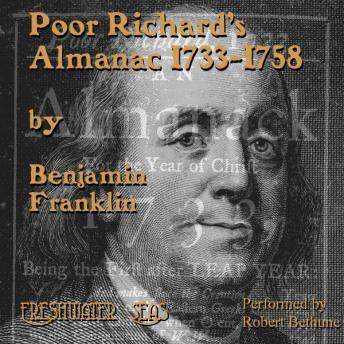 As Benjamin Franklin himself put it:

Besides the astronomical Calculations, and other Things usually contain'd in Almanacks, which have their daily Use indeed while the Year continues, but then become of no Value, I have constantly interspers'd moral Sentences, prudent Maxims, and wise Sayings, many of them containing much good Sense in very few Words, and therefore apt to leave strong and lasting Impressions on the Memory of young Persons, whereby they may receive Benefit as long as they live, when both Almanack and Almanac-maker have been long thrown by and forgotten. If I now and then insert a Joke or two, that seem to have little in them, my Apology is, that such may have their Use, since perhaps for their Sake light airy Minds peruse the rest, and so are struck by somewhat of more Weight and Moment. The Verses on the Heads of the Months are also design'd to have the same Tendency. I need not tell thee that many of them are of my own Making. If thou hast any Judgment in Poetry, thou wilt easily discern the Workman from the Bungler. I know as well as thee, that I am no Poet born, and it is a Trade I never learnt, nor indeed could learn. If I make Verses 't is in Spight-Of Nature and my Stars, I write. Why then should I give my Readers bad Lines of my own, when good Ones of other Peoples are so plenty? 'T is methinks a poor Excuse for the bad Entertainment of Guests that the Food we set before them, tho' coarse and ordinary, is of one's own raising, off one's own Plantation, &c when there is Plenty of what is ten times better, to be had in the Market. On the contrary, I assure ye, my Friends, that I have procur'd the best I could for ye, and much good may it do ye.

I am thy poor Friend, to serve thee,
Richard Saunders.

Since Ben Franklin would have been amazed at audiobooks, let these few details be added:

Unlike most editions of Poor Richard, this one includes essentially all of the text, not just the aphorisms and sayings. This gives you, Courteous Listener, a much better appreciation of how Franklin wrote and thought. In particular, you will find that the full body of the Poor Richard almanacs contains a great deal of religious and spiritual thought in which Franklin laid out and propounded his understanding of Christianity as it stood in his day.

Last but not least, since a long parade of sayings, poems, etc., would be dull all strung together, this edition includes snippets of music between them, drawn from about four dozen Colonial-era tunes and imitating the sound of Colonial instruments such as flute, fife, lute, English guitar, music box and harpsichord.

May you enjoy it and draw benefit from it, as Ben himself would have wished!

This title is due for release on March 16, 2009
We'll send you an email as soon as it is available!