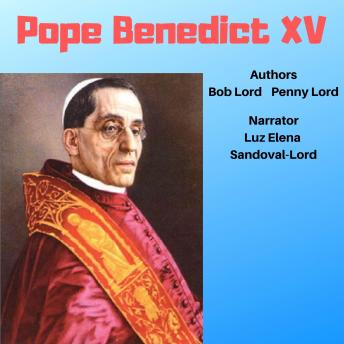 The Pope we’re bringing you now is Pope Benedict XV who reigned from 1914-1922. There are so many facets to this Pope of the First World War, who served only seven years, the bulk of his term having to do directly with the war, or the aftermath of the war. Pope Benedict XV was ignored, ridiculed, and copied by the powers of Europe during the war, and after it was over. His Papal Peace Note of 1917 was rejected and denigrated by our own President Woodrow Wilson and then ultimately copied and made his own by Wilson in the Treaty of Versailles in 1919. He was elected Pope on September 3, 1914, just a month after World War I was declared. And he had only been a Cardinal for three months before his election to the Papacy. Talk about out of the frying pan into the fire!!

But we must begin at the beginning. He was born Giacomo della Chiesa in Pegli, a suburb of Genoa of the aristocracy of The House of Savoy in November 1854. At the time of his birth, Pegli was in the kingdom of Sardinia. It was part of the House of Savoy. This was after Napoleon’s rule in Italy had ended, but before the Unification of Italy under Victor Emmanuel II in 1861. So for all intents and purposes, he was part of the upper crust of the Piedmont section of Italy.