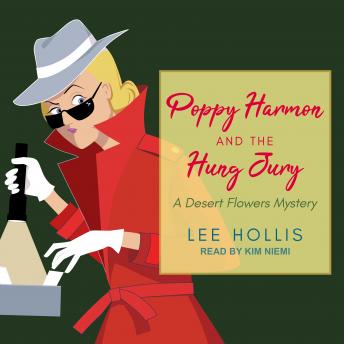 Poppy Harmon and the Hung Jury

If Poppy didn't believe she was in too deep as the only female juror in a high-profile assault case involving an infamously hot-tempered crooner, she's sure of it upon meeting blast-from-her-past Rod Harper. A former TV costar from her short-lived acting days, Rod is as dashing as ever, and now he wants to partner again-this time to locate his missing daughter . . .

Returning a pampered songstress with a penchant for running away back home unscathed shouldn't be too challenging. But dodging Rod's charms while on the job is another story-and so is finding a dead body! When Poppy discovers a fellow juror face down in a swimming pool, she's unwittingly thrust into a murder investigation with sinister parallels to the troubled chanteuse's disappearance . . .

As Poppy struggles to survive a steamy love triangle while deciphering the connection between two seemingly unrelated cases, the Desert Flowers Agency must outsmart a ruthless killer who will do anything to keep hideous secrets hidden away . . . including ensuring Poppy becomes the next forgotten ex-actress to bite the dust . . .

Poppy Harmon and the Hung Jury