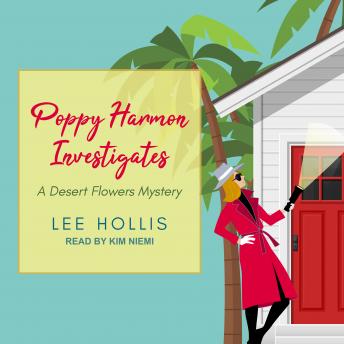 When Poppy goes from complacent retiree to penniless widow in a matter of weeks, the idea of spending her golden years as the biggest charity case in Palm Springs renders her speechless. With no real skills and nothing left to lose, Poppy uses her obsession with true crime shows to start a career as a private eye . . .

But after opening the Desert Flowers Detective Agency with help from her two best friends, Violet and Iris, Poppy realizes that age brings wisdom, not business-until she convinces her daughter's handsome boyfriend, Matt, to pose as the face of the agency. It's not long before Matt's irresistible act snags a client desperate to retrieve priceless jewelry burglarized from an aging actress at the Palm Leaf Retirement Village. Or before Poppy stumbles upon the bloodied body of the victim's arch rival . . .

In a flash, Poppy's innocent detective gig is upstaged by a dangerous murder investigation riddled with slimy suspects and unspeakable scandal. As she and her team uncover the truth, Poppy must confront the secrets about her late husband's past and swiftly catch a killer lurking around the retirement community-even if it means turning her world upside down all over again.