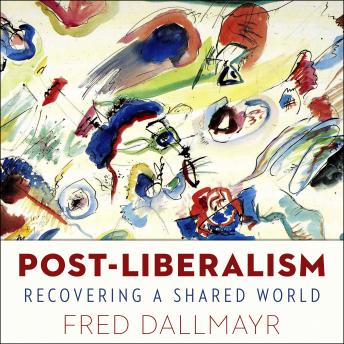 Liberal democracy is the dominant political ideology in the West today. Taken at face value it suggests an equivalency between its two central components-liberalism and democracy-but as Fred Dallmayr argues here, the two operate in very different registers. The two frequently conflict, endangering our public life. This is evident in the rise of self-centered neo-liberalism as well as autocratic movements in our world today.

More specifically, the conflict within liberal democracy is between the pursuit of individual or corporate interest, on the one hand, and a 'people' increasingly fractured by economic and cultural clashes, on the other. Dallmayr asks whether there is still room for genuine privacy and authentic democracy when all public goods, from schools to parks, police, and armies, have been made the target of privatization. In this book, Dallmayr sets out to rescue democracy as a shared public and post-liberal regime. Nonetheless, 'post-liberalism' does not involve the denial of human freedom nor does it suggest the endorsement of illiberal collectivism or nationalism. Drawing on a wide range of contemporary political, religious, and secular thought, Dallmayr charts a possible path to a liberal socialism that is devoid of egalitarian imperatives and a private sphere free from acquisitiveness.