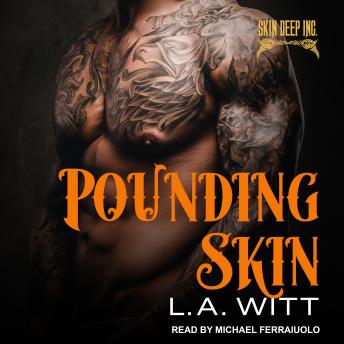 Fighter pilot Jon Russell never sleeps with the same man twice. Known for his lack of shame when it comes to hooking up, Jon has no interest in commitment-even friends with benefits sounds like too much work.

Matt Huffman has slept with lots of women. He's had loads of girlfriends. So why does the hot as hell pilot getting a tattoo as the result of a lost bet stop his breath? And how come he can't stop thinking about him, even after he's gone?

When Jon returns to Skin Deep the second time, he doesn't want another tattoo. He wants to hook up with the gorgeous artist he spent hours agonizingly close to, and Matt wants to explore some curiosity about men. Fulfill the desire he can't stop fantasizing over. And he wants to do it with Jon.

As their casual hook up becomes more than just skin deep, both Matt and Jon are faced with questions they don't want to answer. Matt understands he's bi-but are these feelings he has typical of hooking up with a man? Or is it only Jon that can make his heart pound? If Jon wanted nothing more than a fling, why does he find himself needing not just Matt's body, but all of him?