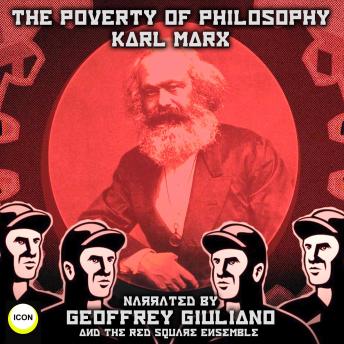 The Poverty of Philosophy

Narrated By: Geoffrey Giuliano And The Red Square Ensemble

In this work, Marx critiques the economic (chapter one) and philosophical (chapter two) doctrine of P.J. Proudhon.

Published in Paris and Brussels in 1847, the book was not republished in full during Marx's lifetime. Excerpts from section five of Chapter Two appeared in different years, mostly between 1872 - 1875 in papers such as La Emancipacion, Der Volksstaat, Social-Demokrat, and others. In 1880 Marx attempted to publish the Poverty of Philosophy in the French socialist newspaper L'Égalité, the organ of the French Workers' Party, but only the foreword and section one of Chapter One were published.

This translation is from the original 1847 French edition. It has been updated to also include the changes/corrections Marx made in the copy of the book he presented to N. Utina in 1876, as well as the corrections made by Frederick Engels in the second French edition and the German editions of 1885 and 1892. The first English edition of this work was published in 1900 by Twentieth Century Press.

Geoffrey Giuliano is the author of over thirty internationally bestselling biographies, including the London Sunday Times bestseller 'Blackbird: The Life and Times of Paul McCartney' and 'Dark Horse: The Private Life of George Harrison'. In addition, Mr. Giuliano is an occasional lecturer at Northwestern University. He is also a well-known mov

This title is due for release on May 29, 2021
We'll send you an email as soon as it is available!