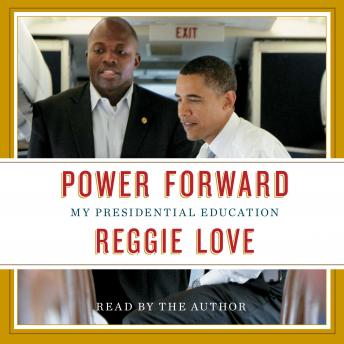 A Washington Post bestseller, Power Forward is a compelling professional coming-of-age story from Reggie Love, the man who spent more time with Barack Obama during his historic first campaign and term than anyone else.

Reggie Love is a unique witness to history, whose introduction to Washington was working in Junior Senator Barack Obama’s mailroom. As “body man” to Obama during his first presidential campaign, Love’s job was to stay one step behind the candidate, but think and act three steps ahead during a typical eighteen-hour workday. As President Obama’s personal aide during that momentous first term, Love sat yards from the Oval Office and often spent more time with the President than anyone else. While his experiences were unique, the lessons he learned during his tenure with the President are universal. Persistence. Responsibility. Passion for a cause greater than yourself. In short, maturity.

Love has been singularly lucky in his mentors. At Duke University, where he was a walk-on and a captain of its fabled basketball team, Love learned from Coach Krzyzewski that sports builds character—from President Obama, Love learned that how you conduct your life defines your character.

Accountability and serving with honor were learned during unsought moments: co-coaching with Malia Obama’s and Sasha Obama’s basketball team with the President; lending Obama his tie ahead of a presidential debate; managing a personal life when no hour is truly your own. From his first interview with Senator Obama, to his near-decision not to follow the President-elect to the White House, Love drew on Coach K’s teachings as he learned to navigate Washington. But it was while owning up to (temporarily) losing the President’s briefcase, playing pick-up games in New Hampshire to secure votes, babysitting the children of visiting heads of state, and keeping the President company at every major turning point of his historic first campaign and administration, that Love learned how persistence and passion can lead not only to success, but to a broader concept of adulthood.

Power Foward is a professional coming-of-age story like no other.