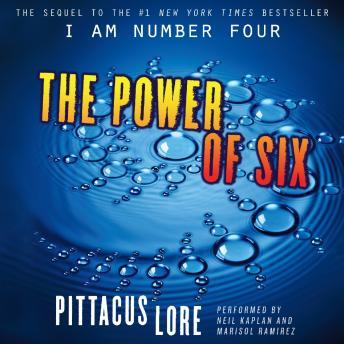 The Power of Six

The second book of the #1 New York Times bestselling I Am Number Four series!

In the beginning, nine aliens left their home planet Lorien when it fell under attack by the evil Mogadorians. They scattered on Earth and went into hiding. They look like ordinary teenagers but have extraordinary powers. The Mogs have come for them. They killed Number One in Malaysia, Number Two in England, and Number Three in Kenya. They tried to get John Smith, Number Four, in Ohio—but they failed.

Now John has joined forces with Number Six, and they are on the run. But they are not alone. Already John and Six have inspired Marina, Number Seven, who has been hiding in Spain. She’s been following the news of what’s happening, and she’s certain this is the sign she’s been waiting for. It’s time to come together.

Michael Bay, director of Transformers, raved: “Number Four is a hero for this generation.” This epic story is perfect for fans of action-packed science fiction like The Fifth Wave series by Rick Yancey, The Maze Runner series by James Dashner, and Orson Scott Card’s Ender’s Game.