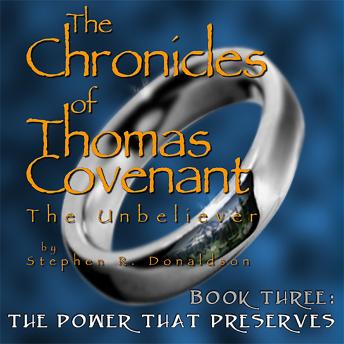 The Power That Preserves

Twice before, Thomas Covenant had been summoned to The Land, the strange otherworldly realm where magic worked and his leprosy vanished. Twice before, he’d been dragged reluctantly into conflict against Lord Foul’s minions, with disastrous consequences for everyone around him. Now, Covenant is back.

In a land blasted by war and drowning in despair, Covenant is the only hope against Foul’s imminent triumph. Yet in order to win he must stand against his dearest friends and direst foes in combat. As Lord Mhoram leads the armies of the Land in helpless warfare, the wild magic of Thomas Covenant’s white gold wedding ring is once again The Land’s only salvation—and he still has no idea how to use it.