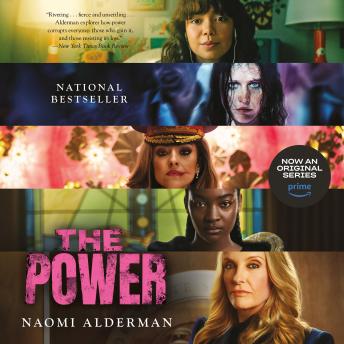 In this stunning bestseller praised as "our era's Handmaid's Tale," a fierce new power has emerged—and only women have it (Washington Post).

In The Power, the world is a recognizable place: there's a rich Nigerian boy who lounges around the family pool; a foster kid whose religious parents hide their true nature; an ambitious American politician; a tough London girl from a tricky family.

But then a vital new force takes root and flourishes, causing their lives to converge with devastating effect. Teenage girls now have immense physical power: they can cause agonizing pain and even death. And, with this small twist of nature, the world drastically resets. From award-winning author Naomi Alderman, The Power is speculative fiction at its most ambitious and provocative, at once taking us on a thrilling journey to an alternate reality, and exposing our own world in bold and surprising ways.

An incredible story, artfully told. Though not strictly allegorical, the parallels are chillingly accurate. Every time I think the comparisons are hyperbolic, I recognize how on-point they are with actual events and circumstances women have suffered from. No other book has effectively put me in a woman's shoes like this one, and it will stick with me forever. Grim, fascinating, remarkable.

The was an amazing novel, and it makes you realize that corruption happens with whomever has power it’s not a gender issue. If women suddenly have the power today, after all men have done to them...it’s no wonder that they fall into the same trap. It is a must read!

I really enjoyed the story and the narration. It was excellent together; the narrator really brought the story to life.

I've listened to a lot of audiobooks, and this narrator (Adjoa Andoh) is by far the best I've ever heard! This book has a global scale, and she nailed everything from a young female American to a cockney Brit to a male Nigerian. The story itself is also very good. It's so honest and compelling.

One of the best books I’ve experienced. Brilliant and dark

The Power is more of a novel of ideas than a story about its characters. It takes a premise that flips society on its head by giving women electric powers. The novel’s premise is compelling and the entire story does a great job of exploring the many speculative branches it sets up for itself. Mother Eve learns to soothe nerves, Tunde’s crush playfully speaks a tingling no, and Roxie fights for her life for her father’s syndicate with the Power. While the book makes good use of its premise, I found the speculative-thriller plot fizzles out at the very end, leaving plots that would be compelling cut short by the novel's Cataclysm. Its been a while since I felt cheated by an ending of a book, and if all of the characters' plots had been resolved I think I would have liked the novel a great deal more. Reactions to the power are embodied in its characters, and I think that was a smart writing decision on Alderman's part. The plot of the novel and its 'what if' premise are explored thoroughly by its characters. I felt that the story was believable in the way that world governments, religion, crime syndicates and the press would adapt to the Power. These institutions find their avatars in Allie, Margot, Tatiana, Roxie, and Tunde respectively. The characters journeys build a thrilling plot throughout the new world that the book sets up and I found myself compelled to read on based on the dark and mouth-watering plot alone. The characters all meet up in Bessapara, the darkest possible outcome to the Power, and I found the confrontations that Tunde and Roxie had with the women of the North to be the most compelling part of the book. Tunde's dream and the rest of the cast struggling to make sense of the Power's darkest possible outcome made me feel that the ending pages would fold together beautifully. Sadly this was not the case. The way the book is written may turn some readers away. Its halfway told and halfway shown, and not both at the same time. But this isn't to say that Naomi is a bad writer, far from it. Alderman does a wonderful job of expressing character's perception and body language, such as when Roxie and Tunde meet for the first time, or Tunde's reactions around the female characters in general. She also conjures up some really beautiful imagery during the thrilling scenes and tender scenes alike, and a great sense of existential dread as well as excitement at the changing world. I thought that the audio guides to the post-cataclysm artifacts were the most interesting part of the book. They so vividly expressed new, female-enforced traditions that expressed the changed world. But there were also so many scenes where sentences will use passive verbs to express an otherwise interesting action. All of the scenes that are shown in the book are really interesting and well-imagined, and I felt that many of the summarized scenes deserved similar treatment. Especially in regards to the ending. The next two paragraphs contain spoiler talk so skip to the bottom if you don't want the ending spoiled. I definitely want this book included in lists of good speculative fiction, I still had issues with Mother Eve’s character and the meta fictional elements at the beginning and end. The Voice that compels Allie to bring about a new religion stripped her of any character development that would have been awesome to read otherwise. I understand that its supposed to be the voice of a jaded God but the new church would have been so much more interesting if it followed the decisions of a girl growing into a powerful woman and leader. On top of that I felt that the ending of the book wiped all of the resolution from the lives of the entire cast too. Roxie and her dad talk about regrets by the ocean, its implied there's nukes going off in the distance, and then the main plot just kinda ends? Save for the meta-fictional epilogue, which I had a some problems with as well. The beginning and the epilogue express a post-cataclysmic world where a male historian is chatting with his female counterpart about reading a historical novel manuscript that he wrote, which is the story we've just read. Its a satirical devil's advocate that switches experienced men with aspiring women, resulting in the fictional Naomi recommending the man uses a woman's name. I liked the idea and the last line of the book, but it brushed away all of the mixed reactions that the characters had to the Power. The epilogue beats the reader over the head with the speculation instead of just using its characters to show us what to speculate on. I would have loved to see the Cataclysm happen and be left to draw my own conclusions rather than the two characters spell it out for me. I recommend this book for those looking for a speculative read but if you're looking for a straightforward plotted sci-fi novel without meta-fictional elements I would look elsewhere. I definitely enjoyed the experience but there were certain parts of the book that prevented it from being brilliant. If the Power had speculated more with its characters than with its rushed ending it may have had the intended impact it was supposed to have. I definitely enjoyed it but overall I had a mixed level of enjoyment with this book.

I started this book over twice because it was hard for me to follow the narrators voice changes for characters and to get into the story. I really think that was best because I understood the beginning of the story so solidly. Don’t give up in the beginning. This story blossoms into a quick-paced dark tale showing that no matter who is in power, it always corrupts. This is a story you will not forget and it’s chillingly paralleled to current events while being so, so far away. The creativity in this story kept me invested from start to finish, and will keep me thinking for days.

A must read in today’s world. Truly provocative. Beautifully written and narrated.