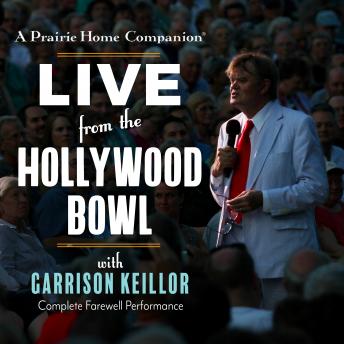 A Prairie Home Companion: Live from the Hollywood Bowl

After 40-plus years of delighting radio audiences each Saturday night with America's favorite live variety show, A Prairie Home Companion founder and host Garrison Keillor bids farewell with an unforgettable performance from the Hollywood Bowl in Los Angeles, California. It's a duet singing extravaganza, with Sara Watkins, Sarah Jarosz, Aoife O'Donovan, Heather Masse, and Christine DiGiallonardo joining Garrison on time-honored American ballads, British Invasion romps, country-western weepers, and Broadway classics. Plus: The Royal Academy of Radio Actors, Tim Russell, Sue Scott, and Fred Newman, with L.A. tales and sound effects straight from rush hour on the 101; Music Director and pianist Richard Dworsky moves wondrously from stride and spirituals through surf instrumentals and a bit of Rock n Roll; a special sendoff from President Barack Obama; and one last update on the News from Lake Wobegon, the little town that time forgot, and the decades cannot improve.