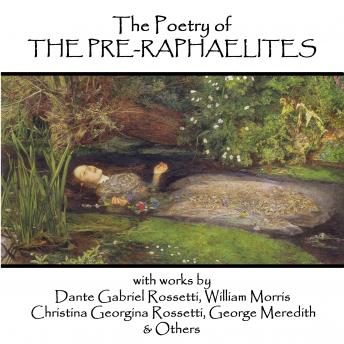 The Pre-Raphaelite Brotherhood began as a group of painters, including Dante Gabriel Rossetti and William Holman Hunt, who wished to reject the stern and academic strictures of current painting and return to the simpler and more uncomplicated days before the Italian High Renaissance and the days of Raphael.The movement was short lived but very influential and, as well, was taken up by a number of different arts.For poetry, it was a major movement and, because of its depiction of pleasures of the flesh, was, at the time, heavily criticised. One critic called it ÔThe Fleshly School of PoetryÕ. However, the sensationalist aside, it unleashed works that had instant appeal. The movement pushed back against contemporary writings which seemed full of tradition and the more mundane problems of society. To exploit and gain attention for their ideas, the Brotherhood started their own periodical; The Germ, which, although it only lasted four numbers did much to bring them attention. Its devotion to the Mediaeval, to symbols and a more naturalistic and detailed approach to poetry were refreshing, especially as the movement sprang up from a Victorian Society that believed morals should be strictly managed, or at least in public.The Pre-Raphaelites as an organised group eventually went their own way but had behind them works which heavily influenced painting and literature for decades to come.With poets of the calibre of Dante Gabriel Rossetti, his sister Christina Georgina Rossetti, William Morris, Charles Algernon Swinburne and George Meredith poetry of great beauty, tenderness and even rawness was placed on the page. This volume comes to you from Portable Poetry, a specialized imprint from Deadtree Publishing. Our range is large and growing and covers single poets, themes, and many compilations.