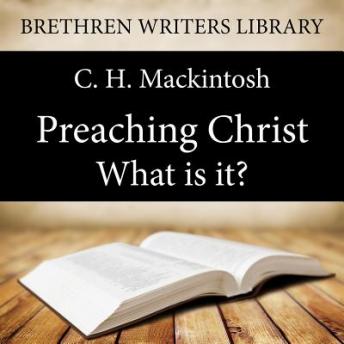 Preaching Christ - What is it?

Preaching Christ – What is it?
Christianity is not a set of abstractions — a number of dogmas — a system of doctrines. It is pre-eminently a religion of living facts, of divine realities — a religion which finds its centre in a divine Person, the Man Christ Jesus. He is the foundation of all Christian doctrine. From His divine and glorious Person all truth radiates. He is the living fountain from which all the streams issue forth in fullness, power and blessing. “In Him was life, and the life was the light of men.”
In this paper CHM explores Christ as a Test, as a Victim and as a Model, and asks the solemn question which still remains to be answered — answered by the world — answered by the individual sinner — “What have you done with the Son of God?
A word about the author: C. H. Mackintosh, (1820 -1896) was born in County Wicklow, Ireland, and is generally known as C.H.M., which is all that appeared on the title pages of his major writings. He was one of the major evangelists and Brethren authors of the 19th century. CHM was converted when he was 18, he briefly farmed and then ran a school before fully committing himself in 1854 to serving the Lord whom he so fervently loved. The rest of his life he spent very actively preaching the gospel to the unsaved and presenting sound ministry both in writing and preaching, travelling widely in the British Isles and living in a number of towns in Ireland and England. He was very active in the Ulster Revival of 1859.
His writings are easily understood and they were particularly influential among North American evangelicals. He also edited for a number of years a magazine called Things New & Old, which had a worldwide distribution and reputation.
This book is part of the Brethren Writers Library series. These books go forth with the purpose of introducing the listener to the writings of men who were gifted of God as teachers ‘for the perfecting of the saints, for the work of the ministry, for the edifying of the body of Christ’. Many of their writings are freely available online at  Stem publishing.com.
Words by the Wayside, 2014.

Preaching Christ - What is it?