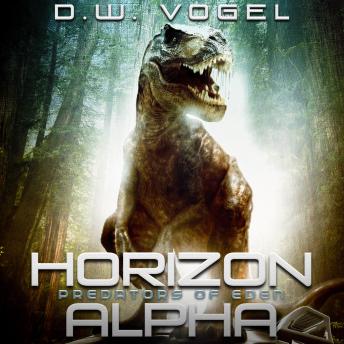 "A heart-pounding adventure. . . . It's The Walking Dead, but with dinosaurs. Like a hungry T-rex, Horizon Alpha: Predators of Eden got its claws right into me." -Gillian Philip, author of the Rebel Angels Series


"We never would have come here if we'd known."
Two hundred years ago, the great Ark Horizon Alpha escaped a doomed Earth and went searching for a new home. The passengers landed on Tau Ceti e expecting paradise, but instead they discovered a planet stuck in its own version of the cretaceous period. The humans' one defense against the dinosaurs ravaging the planet is an electric fence, built from the remains of the shuttles that brought them there.

But Eden base has only days of power left.

With most of the adult men dead, rookie soldier Caleb Wilde and his unit of teenage boys leave the electric fences of Eden in search of a reactor core lost deep in the jungle.

The last remnant of the human race waits behind the electric fence for their return. The dinosaurs wait, too-for the electricity to die and the feast to begin.


"I've often dreamt of trying to survive on a new planet and pitting myself against nature. My dreams were never this chilling, nor the ending as thrilling. I highly recommend this high energy adventure and would place it between Isaac Asimov and Arthur C Clark." -Reid Minnich, author of Koinobi trilogy.

"There's plenty of jet fuel for the imagination. The pace is fast, the stakes are high, and the safety of no one is guaranteed." -John Burris, author of Brothers