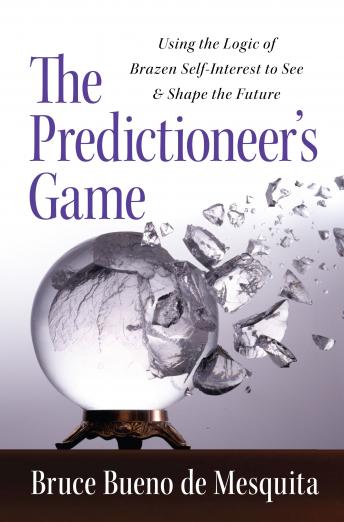 The Predictioneer's Game: Using the Logic of Brazen Self-Interest to See and Shape the Future

Bruce Bueno de Mesquita is a master of game theory, which is a fancy label for a simple idea: People compete, and they always do what they think is in their own best interest. Bueno de Mesquita uses game theory and its insights into human behavior to predict and even engineer political, financial, and personal events. His forecasts, which have been employed by everyone from the CIA to major business firms, have an amazing 90 percent accuracy rate, and in this dazzling and revelatory book he shares his startling methods and lets you play along in a range of high-stakes negotiations and conflicts.

Revealing the origins of game theory and the advances made by John Nash, the Nobel Prize—winning scientist perhaps best known from A Beautiful Mind, Bueno de Mesquita details the controversial and cold-eyed system of calculation that he has since created, one that allows individuals to think strategically about what their opponents want, how much they want it, and how they might react to every move. From there, Bueno de Mesquita games such events as the North Korean disarmament talks and the Middle East peace process and recalls, among other cases, how he correctly predicted which corporate clients of the Arthur Andersen accounting firm were most likely engaged in fraudulent activity (hint: one of them started with an E). And looking as ever to the future, Bueno de Mesquita also demonstrates how game theory can provide successful strategies to combat both global warming (instead of relying on empty regulations, make nations compete in technology) and terror (figure out exactly how much U.S. aid will make Pakistan fight the Taliban).

But as Bueno de Mesquita shows, game theory isn’t just for saving the world. It can help you in your own life, whether you want to succeed in a lawsuit (lawyers argue too much the merits of the case and question too little the motives of their opponents), elect the CEO of your company (change the system of voting on your board to be more advantageous to your candidate), or even buy a car (start by knowing exactly what you want, call every dealer in a fifty-mile radius, and negotiate only over the phone).

Savvy, provocative, and shockingly effective, The Predictioneer’s Game will change how you understand the world and manage your future. Life’s a game, and how you play is whether you win or lose.

Predictioneer's Game: Using the Logic of Brazen Self-Interest to See and Shape the Future