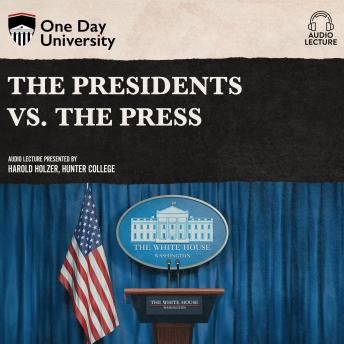 The Presidents vs. the Press

One Day University presents a series of audio lectures recorded in real-time from some of the top minds in the United States. Given by award-winning professors and experts in their field, these recorded lectures dive deep into the worlds of religion, government, literature, and social justice.Every president from George Washington to Donald Trump has tried to woo, win, evade, avoid, counter, and occasionally limit the power of the press. Media technology has of course changed radically-from the twice-weekly newspapers of the founding era to the age of Instagram and Twitter today. However, the battle by the White House to control and interpret official messaging, and journalism's fierce battle to interpret the news independently, has remained unchanged since the birth of America. This talk traces the evolution of this crucial relationship and includes subtle efforts presidents have made to court and befriend the press (Teddy Roosevelt and JFK), and moments of outright censorship (John Adams, Abraham Lincoln, and Woodrow Wilson). Our last two presidents may be the only ones that used social media, but efforts to bypass the Press and reach the public directly with new technology go back over 150 years! This audio lecture includes a supplemental PDF.

Presidents vs. the Press