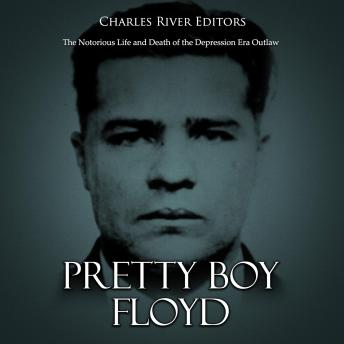 Pretty Boy Floyd: The Notorious Life and Death of the Depression Era Outlaw

November 1, 1932 was a fine autumn day in the sleepy, cotton-farming city of Sallisaw, Oklahoma, the heart of Sequoyah County. The blinding rays of the midday sun were shining their brightest, but the otherwise blistering heat was offset by a brisk breeze. These were ideal conditions for a Tuesday, a seemingly pedestrian day of the week, but what was unfolding in the Sallisaw State Bank was anything but ordinary.
At first glance, it would seem as if a traveling carnival or a homegrown celebrity had come to town. The sidewalks of the city bank and its surrounding establishments were teeming with locals, generations of families, young lovebirds, and clusters of friends. Indeed, they had convened to witness a spectacle, albeit one of an entirely different sort.
The doors of the Sallisaw State Bank swung open with a resounding bang, signaling the start of the show. Out staggered a pair of thieves, each toting bulging sacks of bills and coins and glinting Colt .45s. The hogtied tellers inside the bank desperately wriggled across the floor to voice their distress, craning their necks and directing their muffled screams towards the open door. One had even managed to squirm out of his gag and was calling out to the crowd across the street for help. Unfortunately, his cries were negated, not by the spectators' own cries of alarm, but by thunderous applause, supplemented by whoops, whistles, and a constellation of waving handkerchiefs. Some of those who cleared the path for the robbers' getaway car were supposedly patrons present in the establishment during the stick-up itself.
The ringleader, a striking young gentleman with a square jaw, a smoldering squint, and dark hair slicked back with scented pomade, acknowledged his admirers with a quick nod before ducking into the running vehicle. According to local lore, quite a few of the spectators had been briefed on the robbery beforehand by none other than the ringleader himself. So bold was he in his endeavors that he strolled into the bank's neighboring establishments in the days prior and simply asked its proprietors to refrain from ringing the cops, to which they gladly agreed. He even left those complicit with enough time to extract their savings from the bank.
While it was far from his biggest haul (the thieves fled with $2,531.73, roughly $50,200 today), the courteous ringleader was not the type to bolt without first leaving behind literal tokens of his appreciation. He dipped into his loot and tossed several handfuls of coins out the window. The streets, they say, were so congested with spectators who charged forth to scoop up the loose change that a barricade was created between the approaching squad cars and the getaway vehicle, ultimately allowing the latter to screech off around the bend and out of sight. Prior to their smooth escape, a small sack of bills had also been set aside, in the ringleader's words, "for the schoolkids."
The dashing ringleader, hailed by many as the "Robin Hood of Cookson Hills," was none other than Pretty Boy Floyd, a perplexing character as abhorred as he was revered. To the feds, Pretty Boy Floyd was a venomous, manipulative scoundrel who was egregiously lionized as an anti-hero with a heart of gold. A career bank robber supposedly associated with up to 40 bank robberies, his face would soon be plastered on the 1934 poster of the FBI's Most Wanted alongside John Dillinger, Baby Face Nelson, and Alvin Karper. He was also implicated in multiple murders, yet Pretty Boy Floyd's admirers have been willing to overlook these crimes, with some even providing justifications for his behavior and contending that he was unfairly vilified for fighting an unjust system. To them, he was singled out as a scapegoat, and he used that angle himself, once noting, "I guess I've been accused of everything that has happened, except the kid

Pretty Boy Floyd: The Notorious Life and Death of the Depression Era Outlaw