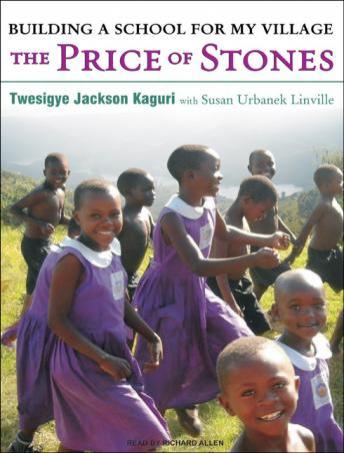 The Price of Stones: Building a School for My Village

An incredibly inspiring and thrilling book, this is the story of Twesigye Jackson Kaguri, who grew up in rural southwestern Uganda, the son of an irascible small-time farmer and his loving wife. In spite of the family's poverty, Jackson succeeds and graduates from the national university with a calling to work in human rights that leads him to Columbia University. There he falls in love with and later marries an American scientist, Beronda.

When Jackson returns to Uganda with his bride, they are overwhelmed by the many villagers who line up to ask for help with food and school fees-and having lost two siblings to AIDS, Jackson is especially moved by the plight of the thousands of abandoned AIDS orphans in his local district. Impulsively, he and Beronda vow to open the first tuition-free school for orphans. A newlywed with little money, and facing opposition from his domineering father and townspeople, Jackson doggedly builds one schoolroom at a time with the help of many supporters in Uganda and the financial pledges of churches in America, and with the sustenance of his strong faith in Jesus Christ.

Weaving together stories from his youth in Uganda and the remarkable account of how one person with a dream can change lives-both his students' and his supporters'-this is an unforgettable book that demonstrates that one person can be a cup of cold water to a thirsty world. The book concludes with the graduation of the first class of Nyaka AIDS orphans, almost all of whom Jackson and his supporters are sponsoring as they continue their education and dream of becoming doctors, teachers, lawyers, engineers, and even, perhaps, the future president of Uganda.

Price of Stones: Building a School for My Village