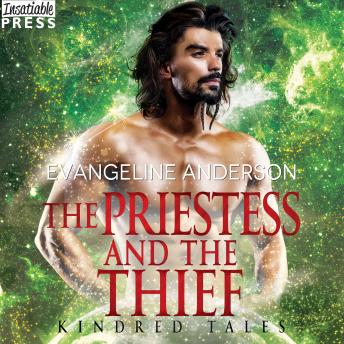 The Priestess and the Thief: A Kindred Tales Novel

A Thief who has no honor...

A Priestess who has broken her vow of chastity...

Can the two of them complete a quest at the treacherous Tenebrian Court?

​Read The Priestess and the Thief to find out.Ellilah is a priestess…but not a very good one. She doesn’t seem to have the right temperament for quiet meditation. And even worse, she broke her vow of chastity at the Christmas party after a dark stranger drugged her punch. Now she’s being sent to the Priory of Extreme Atonement—an ominous place with no windows and daily beatings.But Elli has always had a mind of her own. Instead of handing herself over for punishment, she goes on a quest to find a cure for the old Priestess Superior who is dying.Elli’s quest will take her to the Tenebrian Court and put her in great danger…which is why the Goddess sends her some help in the form of the very same dark stranger who drugged her punch in the first place.Roke is half Havoc—a Kindred-like race of males who refuse to bond with females. He is none too pleased at being sent to protect the little priestess, but he doesn’t dare disobey the Goddess. Once he meets Elli again, however, he feels an instant attraction to her. He goes with her to the dangerous Tenebrian Court to protect her from the predatory nobles—especially the rapacious Crown Prince who insists that everyone “Mirror” his erotic activities at supper every night.Will the two of them be able to complete their quest and leave the Court alive? Will Roke admit he wants to bond with Elli, even though he has sworn never to take a bride? And will Elli ever forgive herself for breaking her vow of chastity with the dark warrior?Read The Priestess and the Thief and find out!

Priestess and the Thief: A Kindred Tales Novel