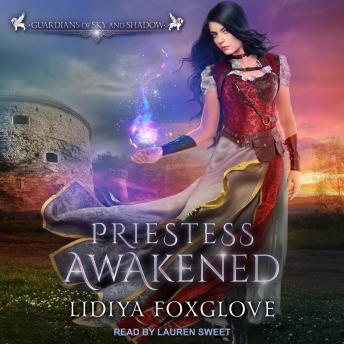 My world isn't safe. The northern gate lies open and monsters roam the land. Towns are locked behind walls, protected by the emperor and his Black Army. Once, a fated priestess and her four guardians kept the gate sealed with magic, but there hasn't been a priestess in over a century . . . or so I thought.

When a monster attacks me within the walls of my village, I am saved by Sir Forrest-the quiet former soldier who came to Istim three years ago.

Turns out, he's been watching me. Waiting for my powers to awaken.

I am the fated priestess.

But there have been others. The genius commander Abel and the Black Army have killed them all. Sir Forrest found out the truth, and now he is driven by his sacred mission to help me find my guardians and bring me to the gate.

All I have to do? Find them and join with them in the Grand Quintet to grant them the powers I apparently hold, close the gate, and save the world . . . without suffering the same dire fate as the priestesses who came before me.

I've always liked attention . . . but this is too much.