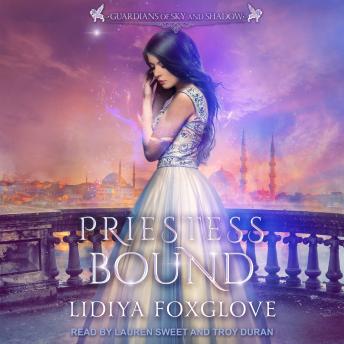 Phoebe is the fated priestess, a channel for magic, whether she likes it or not. She has little power of her own-or does she? A piece of golden jewelry might hold the key to a plot to suppress the priestess's true magic.

Until she can find the secrets, however, she has to stay alive and keep her four guardians in line:

Sir Forrest, her grumpy and reluctant but truly devoted protector; Gilbert the bard, who fell in love with the Prince of Gaermon before he discovered his true fate; Niko the Lucky Dragon, an arrogant smuggler who bows to no one but won't make a move without rolling his dice; and one who is her sworn enemy, but thanks to the magic, Phoebe can't resist him-and he can't resist her.

All her guardians have been found, but this is just the beginning. Who is a friend and who is a foe? What are the Shadow Guardians, really? The Emperor wants her dead, but even the Elders have not told the entire story . . .