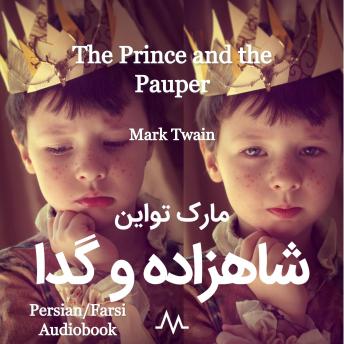 The Prince and the Pauper is a novel by Mark Twain and was published in 1881. It tells the story of two young boys (a prince and a pauper) who exchange their role temporally. They are the same age and exactly look alike. But they have a great difference: Tom Canty is a pauper who lives with his abusive, alcoholic father in Offal Court off Pudding Lane in London, Edward Tudor is Prince of Wales and son of Henry VIII of England. Prior to meeting each other, both boys have dreams of living the life of the other. Tom, dressed as Edward, tries to deal with court customs and manners. On the other hand, Edward forces to face the brutal life of a London pauper and then becomes aware of the stark class inequality in England.
Mark Twain attacks upon social hypocrisy. Also, he exposes the concept that 'clothes make the man' with his satiric and irresistible comedy.
This version of the book is translated by Mohsen Soleimani to Persian (Farsi) and narrated by Noro-Al-Din Djavadian. The Persian version of The Prince and the Pauper’s audiobook is published by Maktub worldwide.