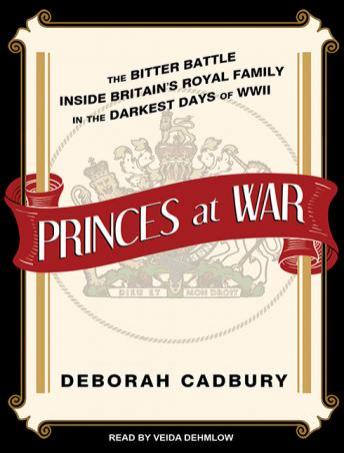 Princes at War: The Bitter Battle Inside Britain's Royal Family in the Darkest Days of WWII

The personal lives of the British Royals were successfully kept out of the public eye by mutual agreement of the press and royal family, but this all changed in 1936 when King Edward VIII abdicated the throne and spurned his responsibility for the sake of the glamorous American socialite and divorcee, Wallis Simpson. In Princes at War, Deborah Cadbury reveals evidence that the Duke and Duchess of Windsor colluded with Hitler to take back the British throne from Edward's younger brother, King George VI, should Germany prevail in the War.

Drawing on new research and recently released files, Deborah Cadbury shows that not only did George VI have to battle to lead his country but battle constantly to keep his brothers, and especially his older brother, in check.

Princes at War: The Bitter Battle Inside Britain's Royal Family in the Darkest Days of WWII