Print In The Snow: Anna's Adventure In The Wyssun World 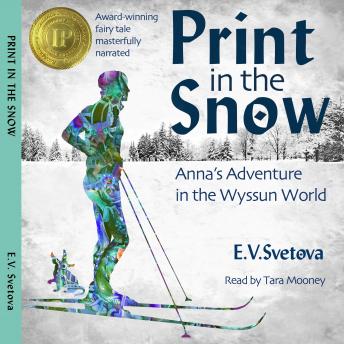 For the fans of Neil Gaiman and Roald Dahl's storytelling: a down-to-earth teen girl must get back home from the Otherworld before the fairytale dream turns into a nightmare. Join the unlikely heroine on an adventure of a lifetime! Lush watercolor illustrations of cool characters, weird monsters, and spooky villains.

Fourteen-year-old Anna has just moved to New York with her mother and stepfather, and she hates everything about her new life. After another argument with her mother, she defiantly sneaks out to ski in Riverside Park.

Much to her surprise she meets another cross-country skier, a boy about her own age, and follows him into a snow-covered magical Otherworld inhabited by the monstrous Wyssun and the Skiers who hunt them. Mistaken for a boy, Anna is accepted by the peculiar Skiers as one of their own, and becomes trapped in the Wyssun' World.

Run by elves--and not the Keebler kind--it's a confusing and dangerous place. She has to unlock secret doors, make new friends, negotiate glaciers and battle tunnel-dwelling beasts, all the while trying to win the affection of the oblivious boy she likes and fend off the advances of a mysterious sorcerer she hates

As Anna struggles against the monstrous world, she fights the inner monsters as well. Before she discovers the truth about love, she has to learn the value of loss, only then can she find the way home.

Print In The Snow: Anna's Adventure In The Wyssun World

This title is due for release on March 29, 2021
We'll send you an email as soon as it is available!