Prisoner of the Vatican: The Popes' Secret Plot to Capture Rome from the New Italian State 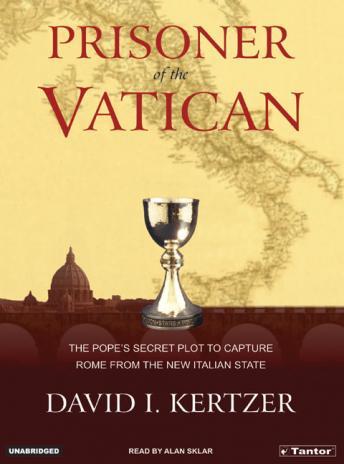 Written By: David I. Kertzer

Based on a wealth of documents long buried in the Vatican archives, Prisoner of the Vatican tells the story of the Church's secret attempt to block the unification of Italy and seize control - not in ancient times, but in the late nineteenth century. For more than fifty years, the pope was a self-imposed prisoner within the Vatican walls, planning to flee Italy, to return only as the restored ruler of Rome and the Papal States. The scheme to dismantle the newborn Italian nation involved not only the cardinals and the Curia but also attempts to exploit the rivalries among France, Germany, Austria, Spain, and England.

Kertzer brings to light an untold drama played out among fascinating characters: Pope Pius IX, the most important pontiff in modern history; King Victor Emmanuel, working behind the backs of his own ministers; the dashing national hero Garibaldi; France's ill-starred Napoleon III, and many more. During this time, Italy was besieged from within and without, and Church history changed forever when the pope was declared infallible for the first time. Prisoner of the Vatican looks deep into the workings of the Church in its final bid to regain the pope's temporal power. Kertzer sweeps readers along with riveting, revelatory panache. No one who reads his new book will ever think of Italy, or the Vatican, in quite the same way again.

Prisoner of the Vatican: The Popes' Secret Plot to Capture Rome from the New Italian State

This title is due for release on November 21, 2004
We'll send you an email as soon as it is available!