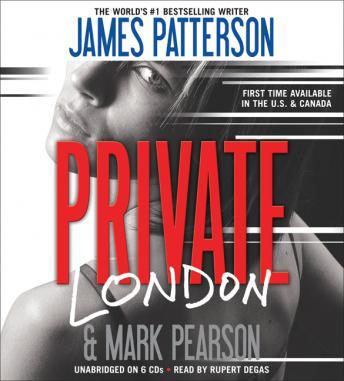 Private goes on the hunt for London's most feared killer since Jack the Ripper. For Hannah Shapiro, a young American student, the nightmare began eight years ago in Los Angeles, when the owner of Private--the world's most exclusive detective agency--saved her from a horrific death. Now, after eight years, the terror follows her to London. The only man who can help is former Royal Military Police Sergeant Dan Carter, head of Private London.

In London, young women are being abducted and their bodies found mutilated in a grotesque, mysterious way. Carter's ex-wife, DI Kirsty Webb, leads the investigation into these brutal murders, which may somehow be linked to Hannah Shapiro. Working together, the two investigators are caught in a desperate race against the odds. Private may be the most advanced detection agency in the world...but can they catch a predator who rivals London's most elusive killer ever?

I thought the narrator did a phenomenal job using various vocal tones when acting out the different characters. The book, on the other hand, rushes character development so much that the reader has no chance to bond with or find a likeable character. The main storyline and lead characters were as predictable as they are with every other James Patterson book. Had it not been for the entertainment of the narrator and the fact that I needed to complete the audio for a book club, I would've stopped listening a quarter of the way through. On another positive note, kudos should be given to Mark Pearson as I'm sure he was the hired to writer to complete the novel. He followed James Patterson's book outline to a tee!