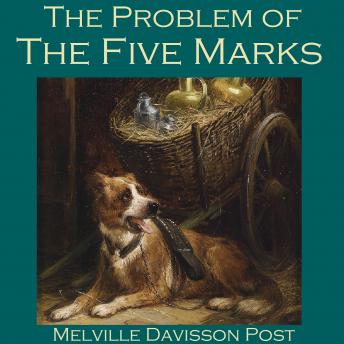 The Problem of the Five Marks

Melville Davisson Post (1869-1930) was an American author best known for his detective stories.

The Problem of the Five Marks tells the tale of a young American who arrives in Paris with secret instructions from his father for the head of the Paris Police. All he knows is that it pertains to the recent death of his Great Aunt.

The senior detective whisks him off to Belgium, where he meets a mysterious and beautiful young woman with a dog-cart and her paralysed father, who are not the poor peasants they appear to be. Before he knows it, he is on the trail of the mysterious 'Five Marks' which will lead to a fabulous treasure.

Problem of the Five Marks