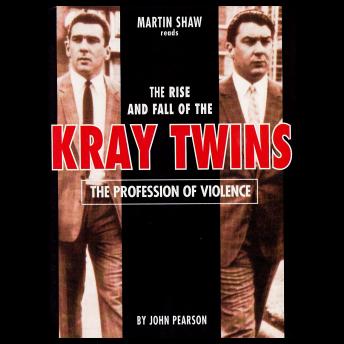 The Profession of Violence: The Rise and Fall of the Kray Twins

The Profession Of Violence; The Rise And Fall Of The Kray Twins. Heroes or villains? In the 1960's London's gangland was ruled by two men - Reggie and Ronnie Kray. Building an empire of crime by intimidation, extortion and terror on a scale never seen before or since, they feted stars of stage and screen, sportsmen and even politicians to gain the respectability they craved. Listen to the story of the rise and fall of the Krays. On the 17th March 1995, Ronnie Kray died suddenly of a heart attack while serving a life sentence for murder. His funeral was watched by over 50,000 people. Reggie died of cancer in 2000. Read by acclaimed actor Martin Shaw, probably most famous for his role as Doyle in The Professionals, he is hugely respected and talented and a regular favourite on TV and in the theatre.