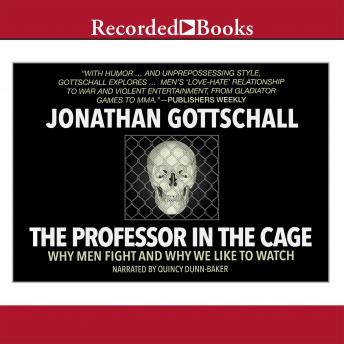 The Professor in the Cage: Why Men Fight and Why We Like to Watch

When a mixed martial arts (MMA) gym moves in across the street from his office, Jonathan Gottschall sees a challenge, and an opportunity. Pushing forty, out of shape, and disenchanted with his job as an adjunct English professor, part of him yearns to cross the street and join up. The other part is terrified. Gottschall eventually works up his nerve, and starts training for a real cage fight. He's fighting not only as a personal test but also to answer questions that have intrigued him for years: Why do men fight? And why do so many seemingly decent people like to watch? Gottschall endures extremes of pain, occasional humiliation, and the incredulity of his wife to take us into the heart of fighting culture-culminating, after almost two years of grueling training, in his own cage fight. Gottschall's unsparing personal journey crystallizes in his epiphany, and ours, that taming male violence through ritualized combat has been a hidden key to the success of the human race. Without the restraining codes of the monkey dance, the world would be a much more chaotic and dangerous place.