The Professor Was a Thief 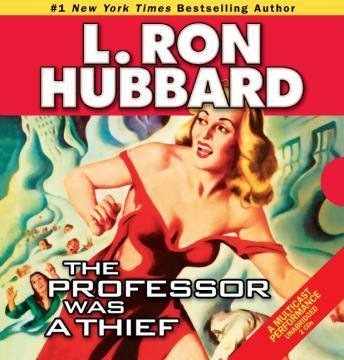 Boldly go to worlds where no one has gone before... Primed for promotion to the World-Journal city editor, grizzled senior reporter Pop is stunned when it's announced that young Leonard Caulborn, the publisher's son-in-law, will get the post. Worse, the lad wants him out. In protest, Pop demands to be given a beat again and gets his wish. . . only now he's got just two days to find the "real" story about a dead-end assignment- a month-old physics lecture- or be fired.

When Pop starts searching for the story's source, a professor named Pertwee, he lands in the middle of the story of a century after the Empire State Building, Grant's Tomb and Grand Central Station all disappear. Apparently, Pertwee's the mastermind behind it all. But Pop soon discovers that, instead of inventing a new way to blow things up, the professor may be doing quite the opposite. ALSO INCLUDES THE SCIENCE FICTION STORIES "BATTLE OF WIZARDS" AND "THE DANGEROUS DIMENSION"

"This is a real corker, pulp fiction at its most entertaining." -Booklist

Professor Was a Thief

This title is due for release on July 18, 2009
We'll send you an email as soon as it is available!