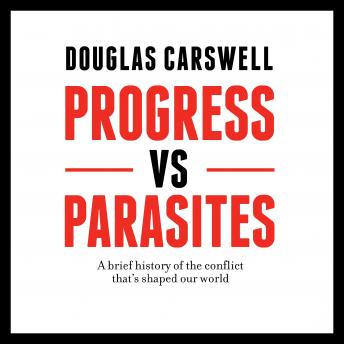 The change in our ancestors' behaviour was barely perceptible at first. Only a few clues in the archaeological record - sea shells, ochre and stone tools exchanged over long distances - hint at what was to come. Today, a network of interdependence and trade spans the planet - lifting most of our species out of the grinding poverty of the past. But for much of history this engine of human progress stalled, with societies rigged in the interests of small parasitic elites. From the Greeks and Romans in antiquity, to China, India and Europe in the Middle Ages, the history of the world can be written as the constant struggle between the productive and the parasitic. Progress Vs Parasites charts this struggle. States rise and empires fall as the balance between the two shifts. It is the idea of freedom, Carswell argues, that ultimately allows the productive to escape the parasitic - and thus decides whether a society flourishes or flounders. A robust defence of classical liberalism, Progress Vs Parasites shows that the greatest threat to human progress today - as it has been in every age - is the idea that human affairs need to be ordered by top down design.
'There is remarkable breadth of history in this book, ranging from ancient Greece to the present day' Guardian.

'A passionately expressed set of arguments about why our current political arrangements do not work' Daily Telegraph.

'As a revolutionary text, Carswell's is right up there with the Communist Manifesto' Sunday Times.

'[Carswell] is as genuine a rebel as parliament contains ... So when the revolution comes, metaphorically at least, I will join Douglas at the barricades' The Times.

'The big twist is that Carswell thinks that the populist challengers to the status quo [...] are just as bad as the elite that they are trying to replace' Money Week.