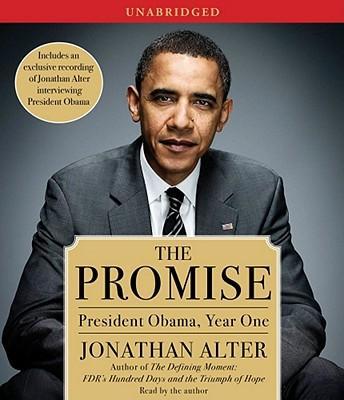 The Promise: President Obama, Year One

Veteran journalist and author of the bestselling The Defining Moment , Jonathan Alter’s portrait of Barack Obama—and his close-knit team—is the first intimate look at a president and an administration that took authority even before the inauguration.

Alter is the author of the extravagantly praised account of FDR’s first months in office, The Defining Moment .

Alter, a native of Chicago who has known Obama and his circle for nearly a decade, provides a fast-paced inside account of the breakneck speed with which President-elect Obama, and then President Obama, began making critical decisions and assuming the burdens of office amid the greatest economic crisis since the Great Depression.

With dozens of exclusive details about everything from the selection of Hillary Clinton as Secretary of State to the president’s secrets for running a good meeting, Alter paints a fresh and often surprising portrait of a highly disciplined and self-aware president and his colorful team. We see a young president of extraordinary temperament grappling with the task of stimulating the economy, bailing out large banks, taking over the American auto industry, making the crucial decision about sending more troops to Afghanistan, deciding whether to negotiate with Iran about its nuclear program, and fighting for a major reform of the country’s health care system. Alter explains what Obama is like as a person, how he operates, and why he is so insistent on leading the country and the world into a new era of wrenching change.