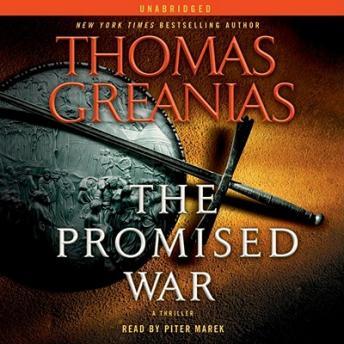 The Promised War: A Thriller

Deep beneath the ancient city of Jerusalem lies a secret that knows no bounds, devastating enough to reach across time. History’s greatest spy story begins here.

For a millennium, Jerusalem’s Temple Mount has been at the center of war and death. There’s never been a time when blood wasn’t spilled upon this ancient, sacred site. Flash forward to present-day Jerusalem, where 35-year-old Israeli counterterrorism agent Sam Deker has just thwarted the most recent act of violence—an attempt by radical Palestinians to blow up the Dome of the Rock mosque and pin the blame on right-wing Orthodox Jews. The threat, however, is a diversion. Deker himself is the real target. He is captured and taken to neighboring Jordan, where he is tortured because of his deep knowledge of Israel’s most closely guarded state secret.

Deker escapes with his comrade Uri Elezar, making it all the way to the border, only to be taken down at the banks of the Jordan River. This time, however, Deker wakes up in the middle of the ancient Israelite army on the eve of its historic siege of Jericho. Deker doesn’t know if he is dead, in some torture-induced psychosis, or really back in time. But General Bin-Nun has declared a colossal holy war, and he’s sending Deker and Elezar on a dangerous mission to spy on the Promised Land in advance of the invasion.

For Deker, it’s his only hope to escape this genocidal hell. Then he finds himself in the arms of a beautiful enemy named Rahab, caught in a web of deadly betrayal, as he struggles to unlock the truth, secure Israel’s future and his own, and save the twenty-first century from The Promised War.