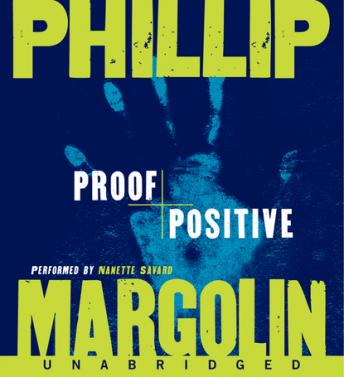 Doug Weaver is a defense attorney who always believes the best of his clients, and Jacob Cohen, on trial for murder, is no exception. Jacob may be homeless and mentally ill, but Doug can't believe that this meek and intensely religious man could have killed and dismembered a woman. Yet Bernard Cashman, a forensic expert at the Oregon State Crime Lab, finds evidence that indisputably connects Cohen with the crime.

Frustrated and confused, Doug consults Amanda Jaffe, who, with her father, Frank, is working on a case that seems completely unrelated -- gangster Art Prochaska is accused of murdering an informer. When Amanda starts looking too closely at the seemingly air-tight evidence in these two apparently unconnected cases, people start to die -- and she discovers that a madman with the power to alter the truth is on the loose.

From the author whose writing the Chicago Tribune called 'twisted and brilliant,' Proof Positive promises all the plot twists and gasp-inducing surprises that are Margolin's undisputed trademark.