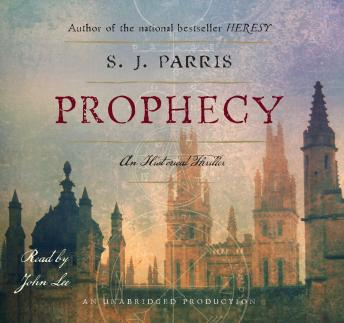 S. J. Parris returns with the next Giordano Bruno mystery, set inside Queen Elizabeth’s palace and steeped in period atmospherics and the strange workings of the occult.

It is the year of the Great Conjunction, when the two most powerful planets, Jupiter and Saturn, align—an astrologi­cal phenomenon that occurs once every thousand years and heralds the death of one age and the dawn of another. The streets of London are abuzz with predictions of horrific events to come, possibly even the death of Queen Elizabeth.

When several of the queen’s maids of honor are found dead, rumors of black magic abound. Elizabeth calls upon her personal astrologer, John Dee, and Giordano Bruno to solve the crimes. While Dee turns to a mysterious medium claiming knowledge of the murders, Bruno fears that some­thing far more sinister is at work. But even as the climate of fear at the palace intensifies, the queen refuses to believe that the killer could be someone within her own court.

Bruno must play a dangerous game: can he allow the plot to progress far enough to give the queen the proof she needs without putting her, England, or his own life in danger?

In this utterly gripping and gorgeously written novel, S. J. Parris has proven herself the new master of the historical thriller.