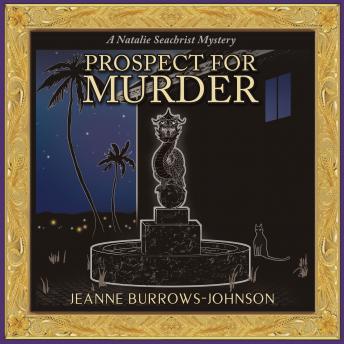 Retired travel writer Natalie Seachrist has had visions all of her life. But her world changes forever when her twin Nathan confirms that the body she envisioned draped over a vintage Mustang was his granddaughter. During subsequent research for friend and private investigator Keoni Hewitt, Natalie experiences another unsettling vision. So as the police launch their customary investigation of the unexplained death, Natalie moves to the Honolulu foothills apartments where Ariel died.

With Keoni's cautionary advice, she explores the premises and personalities of the complex with her feline companion Miss Una. There she discovers the fascinating story of the Shàngh?i origins of the affluent apartment owners Pearl Wong and her sister Jade Bishop. She also finds more than a little discord between Pearl Wong's nephew and the handyman who owns the Mustang on which Ariel died. Unfortunately, Natalie's on-site sleuthing produces few concrete leads. But just as she questions the purpose of her mission, she experiences a vision from the perspective of her grandniece, she is forced to reveal her escalating visions.

At Natalie's invitation, Keoni joins Nathan and her for meetings with the coroner and the Honolulu police detective who was once his partner. Despite items missing from Ariel's effects, a lack of physical evidence means the open case is being examined as an accident or suicide. But why would a young girl approaching the end of a successful college career kill herself?

Natalie remains determined to solve the mystery before the police close their investigation without an arrest. But has she put herself in the way of a killer who's willing to murder again to hide their secret?

This title is due for release on July 25, 2016
We'll send you an email as soon as it is available!